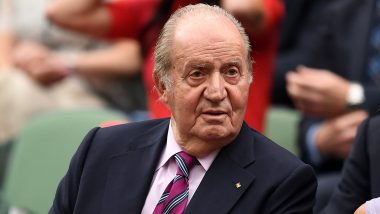 Madrid, August 3: Spain's former king Juan Carlos, accused in a major graft case, left the nation less than two months after a probe was initiated against him. A brief statement issued by his Palace confirmed that the erstwhile monarch left Spain. The nation where he has shifted to was not revealed by the time preliminary reports had emerged.

Carlos, once a popular king in Spain known for his role in transitioning the country towards democracy in the 1970s', lost his goodwill after a spree of scams scandals involving him were unearthed between 2010-2014. Germany Adds 3 Regions of Spain to List of 'High-Risk Destinations', Returning Holidayers to Undergo COVID-19 Tests at Airport.

The prosecutor of Spanish Supreme Court had, on June 8, told the apex judicial body that action could be initiated against Carlos in the Saudi railway project case as the former king no longer enjoys immunity.

Till 2014, Carlos was shielded against any legal action as he was still the nominal king of the nation. In that year, he abdicated his responsibility to son Philip after he was rocked by criticism over his relationship with businessman Corinna zu Sayn-Wittgenstein.

Carlos was accused of accepting $100 million from the Saudi King after a contract was finalised between a consortium of 12 Spanish companies and the Kingdom of Saudi Arabia to develop a high-speed rail-line between the holy cities of Mecca and Medina.

Out of the said amount, he was accused of transferring $65 million to the account of Sayn-Wittgenstein. After the case had surfaced, King Philip had announced that he would sever all ties with the Royal Palace and also discontinued accepting the palace allowance.

(The above story first appeared on LatestLY on Aug 03, 2020 11:11 PM IST. For more news and updates on politics, world, sports, entertainment and lifestyle, log on to our website latestly.com).