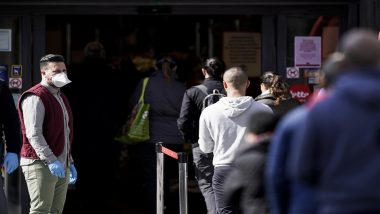 Spain was the worst-affected in first wave of coronavirus in Europe | File Image | (Photo Credits: AFP)

Berlin, July 31: The German Interior Ministry on Friday added three regions of northern Spain to the list of "high-risk destinations". Holidayers returning from Catalonia, Aragon and Navarre will need to mandatorily undergo COVID-19 tests at the airport. Only if they are found negative, the authorities will allow them to proceed towards their residences.

If the returnees are found to have contracted the infection, they will be shifted to the institutional quarantine centres. Even if those tested are found to be negative, they will be asked to remain in home isolation for around a week's period, the guidelines said. UK's New Coronavirus Guidelines: Travellers Arriving from Spain Ordered to Quarantine for 14 Days.

German tourists returning from other parts of Spain would also be recommended to undergo the tests. While they would be allowed to leave the airport without being tested, the authorities will give them the permission to undergo tests for free within 72 hours of their arrival.

Scores of Germans thronged to Barcelona, the top tourist attraction in neighbouring Spain, earlier this month. The beaches of Costa Brava were another prime attraction for the Germans, who were compelled to undertake a tour after remaining under a lockdown for two months, followed by partial restrictions for another 45 days.

Spain, one of the prime tourism hotspots in Europe during the summer months, has reported a second wave of infections. The country has recorded a total of 1,229 new infections on Thursday, the highest since April 30.

After the spike reported by Spain, the European nations swung into action and regulated travel from and to the nation. The United Kingdom announced that tourists returning from Spain would need to undergo mandatory 14-day quarantine.

(The above story first appeared on LatestLY on Jul 31, 2020 07:33 PM IST. For more news and updates on politics, world, sports, entertainment and lifestyle, log on to our website latestly.com).