There could be two nuclear warheads aboard the sunken Russian cruiser, Moskva, as per Ukrainian experts, media reports said. 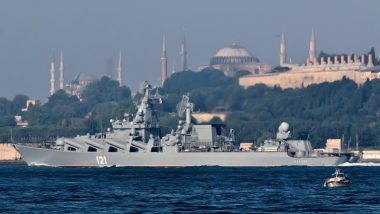 Kiev, April 15: There could be two nuclear warheads aboard the sunken Russian cruiser, Moskva, as per Ukrainian experts, media reports said.

Andrii Klymenko, project manager at the Black Sea Institute for Strategic Studies, said: "Experts say that there are 2 nuclear warheads for cruise missiles on board the 'Moskva' (perhaps this could be news for many, but yes, this ship is a carrier of nuclear weapons)," the Ukrayinska Pravda reported.

"Where are these warheads? Where were they when the ammunition exploded? Where is the point on the map? Coordinates? - These are the competencies of the UN Security Council, the IAEA...

"The Black Sea coastal states - Turkey, Romania, Bulgaria, Georgia - should join this immediately," he added. In the evening of 13 April, it was reported that Ukrainian anti-ship Neptune missile hit the missile cruiser of the Russian Black Sea Fleet. After that, the cruiser with 16 cruise missiles was disabled. Russia Starts Delivery of Second Squadron of S-400 Missile System to India Amid Ukraine War.

On the morning of April 14, the Russian Defence Ministry admitted that there was a fire on the deck of the flagship of the Black Sea Fleet, but dropped everything on the accidental detonation of ammunition. The command personally reported the incident to Russian President Vladimir Putin, Ukrayinska Pravda reported. Russia Claims Ukrainian Helicopters Carried Out Strikes On Its Territory.

The Ukrainian military command announced in the afternoon of April 14 that the cruiser "Moskva" began to sink due to the hit of Ukrainian missiles.

It later was reported that the Russian ship sank after a long fire on board while being towed to Sevastopol.

(The above story first appeared on LatestLY on Apr 15, 2022 07:19 PM IST. For more news and updates on politics, world, sports, entertainment and lifestyle, log on to our website latestly.com).