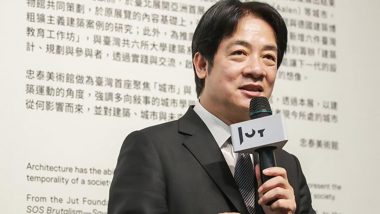 Taipei, October 10: Vice-President of Taiwan Lai Ching-te on Saturday thanked Indians who greeted the nation on its National Day. Lai Ching-te took to Twitter to express gratitude to all those who wished Taiwan.  He also used hashtag "Milk tea Alliance" in his tweet as a sign of protest against China. The Taiwan Vice President's tweet came hours after Bharatiya Janata Party (BJP) leader Tajinder Bagga put up posters greeting Taiwan on its National Day.

Ching-te tweeted, "Proud to see our flag fly high and be recognized all over the world. We thank the people from so many countries who today expressed congratulations and support. Especially our Indian friends. Namaste!" he also wrote "#JaiHind" along with his tweet. Taiwan National Day 2020: BJP Leader Tajinder Bagga Puts Up 'Happy National Day' Posters Near Chinese Embassy in New Delhi.

Proud to see our flag fly high and be recognized all over the world. We thank the people from so many countries who today expressed congratulations and support. Especially our Indian friends. Namaste!#TaiwanNationalDay #JaiHind #MilkTeaAlliance pic.twitter.com/cOllMWJdtG

What is Milk Tea Alliance:

The Milk Tea Alliance is an online democratic solidarity movement against China by neitizens from Hong Kong, Taiwan, and Thailand. Notably, after the 2020 China–India skirmishes, India has also been included in some formulations of the Alliance. Milk tea is seen as a symbol of solidarity in many Asian countries tea is historically consumed with milk.

Notably, on the intervening night of October 9 and 10, posters greeting Taiwan on its National Day cropped up near the Chinese Embassy in New Delhi. However, the government have not yet issued any statement over the incident. Taiwan Threatens China For Flying Fighter Jets Into Its Air Defence Identification Zone; 'Don’t Cross Line', Says Vice President Lai Ching-te.

The posters were put up by Bagga. The development came days after the Chinese Embassy issued diktat warning Indian media over the coverage of Taiwan National Day 2020. Responding to China,  the Taiwan Foreign Ministry, in a statement, said the media of a democratic country like India would respond to China's diktat with only two words: "get lost".

Taiwan, officially known as the Republic of China, celebrated its national day every year on October 10. It commemorates the start of the Wuchang Uprising of October 10,  1911, which led to the end of the imperial Qing Dynasty.

(The above story first appeared on LatestLY on Oct 10, 2020 01:57 PM IST. For more news and updates on politics, world, sports, entertainment and lifestyle, log on to our website latestly.com).