Tanzanian health authorities said that 10,313,887 children aged below five years will be vaccinated against polio between April 28 and May 1 in the country and Zanzibar 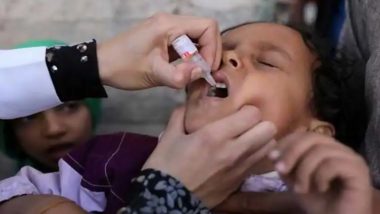 Dar Es Salaam, April 24: Tanzanian health authorities said that 10,313,887 children aged below five years will be vaccinated against polio between April 28 and May 1 in the country and Zanzibar.

A statement by the Ministry of Health said the vaccination will be conducted after neighbouring Malawi reported an outbreak of the disease on February 17 when a three-year-old child was diagnosed, reports Xinhua news agency.

Children in four regions of Mbeya, Songwe, Ruvuma and Njombe have already been vaccinated against polio, said the statement without mentioning the total number.

The statement said the Ministry of Health will undertake the vaccination in collaboration with the President's Office responsible for Regional Administration and Local Government, the World Health Organization, Unicef and development partners. Polio Ravivar: 89 Lakh Kids Below 5 Years Given Polio Drops Across India, Says Health Ministry.

It urged district and regional commissioners across the country to oversee the vaccination. The statement said the last polio case in Tanzania was reported in 1996 in Mtwara region, adding that in 2020 polio was declared eliminated in the African region.

According to the statement, polio is still prevalent in Afghanistan and Pakistan.

(The above story first appeared on LatestLY on Apr 24, 2022 01:30 PM IST. For more news and updates on politics, world, sports, entertainment and lifestyle, log on to our website latestly.com).