US Capitol Violence: 4 Dead as Trump Supporters Storm Capitol Building to Disrupt Electoral Count; Here's Everything That Happened So Far

One woman was killed in the violence that followed after supporters of US President Donald Trump stormed the US Capitol and disrupted electoral count on Wednesday. Thousands of Trump supporters entered the Capitol building in a bid to overturn his election defeat. 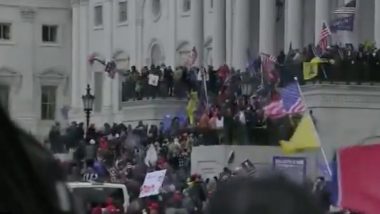 Washington, January 7:  Four people died during the violent protest at the Capitol on Wednesday, according to Metro DC police.  One woman was shot by police, and three others died as a result of medical emergencies. These followed after supporters of US President Donald Trump stormed the US Capitol and disrupted electoral count on Wednesday. Thousands of Trump supporters entered the Capitol building in a bid to overturn his election defeat. US Capitol Violence: Stephanie Grisham, Sarah Matthews Resign From Donald Trump Administration, Several Top Aides Considering the Same.

According to reports, 52 people were arrested. Of those, 47 were related to curfew violations.  Lawmakers were evacuated from the US Capitol after protesters breached security and entered the premises. President-elect said he was 'shocked and saddened' that the nation had come to such a 'dark moment', and called the protests an 'insurrection'. However, according to the latest update, US lawmakers reconvene to certify Electoral College votes after the violence at the US Capitol in Washington DC. US Capitol Building Under Lockdown Following Violent Protests by Pro-Donald Trump Demonstrators.

This is an emergency situation and we are taking appropriate emergency measures, including removing President Trump's video. We removed it because on balance we believe it contributes to rather than diminishes the risk of ongoing violence.

Here are some developments:

(The above story first appeared on LatestLY on Jan 07, 2021 10:21 AM IST. For more news and updates on politics, world, sports, entertainment and lifestyle, log on to our website latestly.com).