The US has "clearly distanced" itself from Pakistan, former American military chief Mike Mullen said as the White House and the State Department publicly rejected claims of their involvement in Islamabads domestic politics, Dawn news reported. 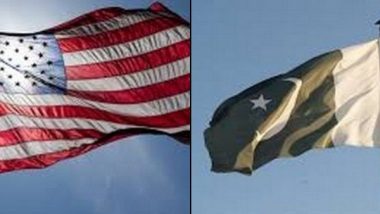 Washington, April 2: The US has "clearly distanced" itself from Pakistan, former American military chief Mike Mullen said as the White House and the State Department publicly rejected claims of their involvement in Islamabads domestic politics, Dawn news reported. "It is difficult, difficult to say," said Admiral Mullen when asked to describe Washington's relations with Pakistan.

"I think we have clearly distanced ourselves from Pakistan over the last decade and Pakistan has more and more fallen under the umbrella of China," he told VOA Urdu Service in Washington. Pakistan Army Chief General Qamar Javed Bajwa Calls for Dialogue To Resolve All Disputes With India.

Admiral Mullen, who was chairman of the US Joint Chiefs of Staff from October 2007 to September 2011, was also named in the so-called Memogate controversy, which revolved around a memorandum, ostensibly seeking US support for preventing a feared military takeover in Pakistan that never happened.

He noted that China was not only Islamabad's neighbour but it "has been supportive of Pakistan" as well. This closeness, he said, "suits China's global ambition" because Beijing would prefer to have a neighbour "closer to them and not close to the US".

For these reasons, the US-Pakistan relationship "is going to be tense for quite some time", he added. Asked if he believed Pakistan helped the Taliban take over Kabul in August last year, Admiral Mullen said: "They did not do much to stop it for sure."

He recalled that as the US army chief he had told a congressional hearing that Pakistani intelligence agencies were active in Afghanistan "and I still believe that connectivity is there. It sort of cuts both ways".

The former US military chief reiterated a complaint that's often heard in Washington that Pakistan "played on both sides (the US and the Taliban)" in Afghanistan, Dawn reported.

(The above story first appeared on LatestLY on Apr 02, 2022 02:07 PM IST. For more news and updates on politics, world, sports, entertainment and lifestyle, log on to our website latestly.com).