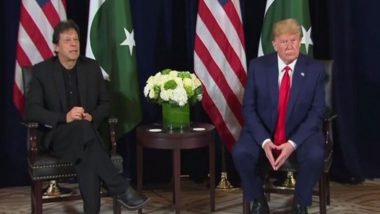 Davos, January 21: US President Donald Trump, ahead of his meeting with Pakistan Prime Minister Imran Khan at Davos in Switzerland, said that he is ready to "help" India and Pakistan on the Kashmir issue. The two leaders met at the sidelines of Davos meet in Switzerland on Tuesday. The Pakistan Prime Minister is in Davos to attend the World Economic Forum assembly scheduled from January 21 to 24. Donald Trump Offers to Mediate Again in Kashmir Issue if India And Pakistan Agree, Says 'I Trust Imran Khan'.

This is the third leadership-level interaction between Pakistan and the US since Prime Minister Khan’s maiden visit to Washington in July 2019. The two leaders had also met on the sidelines of the UN General Assembly in September. Donald Trump Offers to Mediate Again in 'Complicated' Kashmir Issue, Says 'Hindus And Muslims Don't Get Along Well'.

Their meeting comes amid tensions in the Gulf region between Iran and the US, and Pakistan’s efforts to drum up support on the Kashmir issue. Ahead of the announcement of his meeting with Trump, Khan on Saturday warned that he feared “an Indian false flag operation.”

He said there was an urgent need for UN Security Council to insist India allow the UN Military Observer Group in India and Pakistan (UNMOGIP) return to Kashmir. “I want to make clear to India and the international community that if India continues its military attacks killing civilians across LoC, Pakistan will find it increasingly difficult to remain an inactive observer along the LoC,” Khan tweeted on Saturday.

India maintains that the UNMOGIP, established in January 1949, has outlived its utility and is irrelevant after the Simla Agreement and the consequent establishment of the Line of Control. Several other meetings are also scheduled with a wide range of corporate, business, technology and finance executives, and representatives of international financial institutions, the Foreign Office said, disclosing details of Khan’s programme in Davos.

(The above story first appeared on LatestLY on Jan 22, 2020 12:00 AM IST. For more news and updates on politics, world, sports, entertainment and lifestyle, log on to our website latestly.com).