US Special Presidential Envoy on Climate Change John Kerry has welcomed India's ambitious goal of generating 450 gigawatts of renewable energy by 2030 and said that Washington will help New Delhi achieve it by helping mobilise international funding. 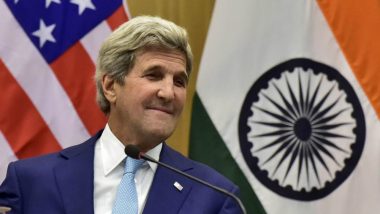 Rounding up a three-day visit to India on Thursday, Kerry told reporters: "That's a terrific goal, we think that's a powerful goal," and "we want to make sure that we're facilitating the ability to reach that goal". India is Major Player on Global Stage, Says US Envoy John Kerry.

Modi tweeted after their meeting on Wednesday: "Had an excellent discussion with US Special Presidential Envoy for Climate John Kerry. His passion and commitment to expedite climate action are commendable."

"We intend to work very closely together, focusing on the deployment of 450 GW, on technology and on the finance components of that," Kerry said.

"There are lots of countries that would be willing to invest -- obviously with the right investment conditions," in India's green energy projects, he said.

He said that the United Arab Emirates, which he visited before coming to India, is interested in partnering with the US on the endeavour and that he had spoken to some countries in Europe and North America "who are prepared to try to be helpful".

Kerry's visit to India comes ahead of the virtual Leaders Summit on Climate convened by President Joe Biden on April 22 and 23, and the UN Climate Change Conference in Glasgow in November.

Biden has made climate change one of his top priorities and appointed Kerry, a former Secretary of State, to be the point person for it.

The President sees an important role for New Delhi in his global climate agenda as the two countries draw closer together strategically while India is the third biggest emitter of greenhouse gases after the US and China, although in per capita terms it is a much smaller polluter.

Although Biden seeks cooperation with China on climate change, unlike with New Delhi, political and strategic relations with Beijing are hostile.

Kerry said that "India is a key partner" of the US fighting climate change.

"It's not only the largest democracy in the world, but it is by values a country that hugely cares about the relationship of all of us to the planet, to the environment, the surroundings around us," he said.

"Prime Minister is hugely seized by a sense of responsibility which we feel provides the capacity for a very important partnership."

About the scope of the climate change partnership between India and US, Kerry said: "We have, both of us, innovative, entrepreneurial populations that are always trying to push the limits of discovery -- research and development, the creation of new products, new solutions.

"Having a partnership really links a country that has enormous development challenges with a country that is developed but still has major transitional infrastructure and other types of challenges, so there's a lot in common and we very much look forward to working with our friends here."

"Officials of the two countries will pursue ways in which they can deepen their partnership on climate and clean energy in this critical decade," the State Department said in a statement.

During his interaction with reporters, Kerry said that former President Donald Trump had damaged Washington's standing on climate by pulling out of the Paris Climate Agreement, but "we come back with humility. We come back knowing the last four years were a disappointment to people".

"He shot America's credibility in the head and turned his back on science and became the only leader of a nation who decided to withdraw from the agreement.

"We get hurt by him getting out but the truth is the American people continued to fight. And people need to know that because that will help us restore our credibility.

"I hope people in India and elsewhere in the world will recognise that Donald Trump is Donald Trump... He lost the race," he added.

Kerry is scheduled to begin a visit to Bangladesh on Friday.

While in New Delhi, Kerry also met with visiting Russian Foreign Minister Serger Lavrov who was on a separate mission to India and talked about climate.

Russia's TASS News Agency reported that the meeting took place in the lobby of the hotel where they were both staying.

It noted that Biden has invited Russia's President Vladimir Putin to the Climate Summit and said that according to Kremlin Spokesman Dmitry Peskov, "the details are now being worked out through diplomatic channels".

(The above story first appeared on LatestLY on Apr 09, 2021 10:35 AM IST. For more news and updates on politics, world, sports, entertainment and lifestyle, log on to our website latestly.com).