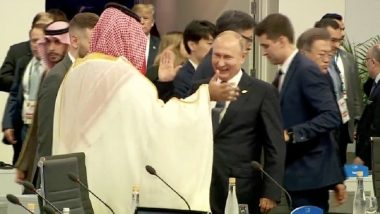 Buenos Aires, December 1: At a multilateral meeting at the G20 summit, Russian President Vladimir Putin and Saudi Arabia's Crown Prince Mohammed bin Salman greeted each other in an overwhelming manner with a "high five". The video of their astounding handshake went viral on social media, with voices dissenting against the murder of journalist Jamal Khashoggi being left fuming.

In the video being circulated, Putin and Prince Salman are seen smiling and then smashing a high five before sitting next to each other. Notably, the two leaders have avoided bilateral interaction with US President Donald Trump at the G20. Report Claims CIA Has ‘Smoking Gun Phone Call’ Linking Saudi Crown Prince to Jamal Khashoggi Killing.

Watch Putin, Saudi Prince's 'High-Five' Which Has Taken Internet by a Storm:

The warm greetings between Putin and Khashoggi has led to a strong reaction from Twitterati. The Russian President's gesture, they said, indicates that he has either vindicated Prince Salman's claim of innocence in Khashoggi's murder or "congratulated him for the undercover operation".

Notably, the greeting came a day after the Russian state media said Putin would be discussing Khashoggi's murder with Prince Salman at the summit.

Meanwhile, some of the social media users said they were not surprised by Putin's actions, claiming that he is "himself involved in the assassination" of more than 20 Russian scribes.

Do you really want to know who Vladimir Putin is?

This man had @washingtonpost journalist Jamal Khashoggi murdered and cut in pieces and this is the loving embrace he gets.

Both of them are evil. pic.twitter.com/FQDb9j7tG2

Killer of journalist Jamal khashoggi with Putin, killer of Russian journalist Anna Politkovskaya (and dozens more) give each other a special murderers high five as they yuck it up at summit https://t.co/5dDnBQtUw7

The Saudi Prince has succeeded in receiving a reasonable welcome at the G20, despite reports claiming ahead of his visit that he risks facing cold shoulders.

The United States, however, has maintained a distance with their counterparts from Riyadh. This comes in the wake of a recent CIA report which claimed that the orders to kill Khashoggi came from the highest levels of Saudi government, involving the Crown Prince himself.

(The above story first appeared on LatestLY on Dec 01, 2018 06:29 PM IST. For more news and updates on politics, world, sports, entertainment and lifestyle, log on to our website latestly.com).