Woman Bites Off Man’s Tongue During Street Brawl, Seagull Flies Off With It

A violent brawl between a man and a woman in Scotland's Edinburgh ended with a seagull flying away with a tongue. 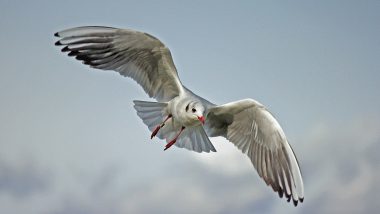 Edinburgh, February 23: A violent brawl between a man and a woman in Scotland's Edinburgh ended with a seagull flying away with a tongue. Yes, the woman, identified as Bethaney Ryan, bit a large chunk James McKenzie's tongue when she lent to kiss him during the fight. Shortly after, a large seagull swooped in out of nowhere and ate a part of James McKenzie's tongue. The bird then flew away with it. Nigerian Woman Bites off Sleeping Husband’s Penis After Man Leaves ‘Marks on Her Breasts’ in a Violent Dispute.

The incident, which dates back to August 2019, made headlines again when Bethaney pleaded guilty to assaulting James recently. She also admitted kissing him and biting off part of his tongue. The chunk of McKenzie's tongue, which the seagull took away, reportedly was approximately two centimetres by three centimetres in size. Mumbai: Woman Files Assault Case Against Husband, Bites & Slaps Cops at Manickpur Police Station When He Gets Bail.

"She kissed him on the lips and during the course of that she bit through his tongue which caused a piece of his tongue to be removed," prosecutor Susan Dickson told Edinburgh Sheriff Court. "Mr McKenzie walked off and spat it out, at which point the piece of muscle was picked up by a large seagull that made off with it," she added.

After the incident, McKenzie was taken to the hospital, but a reattachment surgery could not be performed as the piece of his tongue was not found.

(The above story first appeared on LatestLY on Feb 23, 2021 01:58 PM IST. For more news and updates on politics, world, sports, entertainment and lifestyle, log on to our website latestly.com).