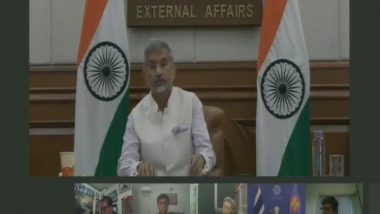 New Delhi, August 20: External Affairs Minister S Jaishankar on Thursday on said that the world faces an "unprecedented challenge" due to COVID-19 and there is a need to go beyond orthodoxes.

"As we come out of this pandemic, let us be clear on one fact that the world will never be the same again- that means new thinking, fresh ideas, more imagination and greater openness. We need to go beyond orthodoxes," Jaishankar said at the sixth roundtable of ASEAN-India Network of Think Tanks (AINTT). He noted that the impact of COVID-19 has been beyond the collective imagination and its destruction remains unclear. COVID-19 Tally in India Crosses 28 Lakh Mark With a Spike of 69,652 New Cases in Past 24 Hours, Death Toll Rises to 53,866.

"World faces an unprecedented challenge. None of us have seen a crisis of this proportion before. Even after several months, the true extent of its destruction remains unclear," he said.

"The impact of COVID-19 has been beyond our collective imagination. Current estimates put the cumulative loss in the range of USD 5.8 to USD 8.8 trillion or approximately 6.5 or 9.7 per cent of the global GDP. The contraction of the world economy being predicted will surely be largest since the great depression," Jaishankar added. The minister said how and when and wit (ANI)