West Indies white-ball skipper Nicholas Pooran was announced as the new Icon Player for defending champions Deccan Gladiators ahead of the season six of Abu Dhabi T10 tournament. Pooran joins the ranks of his West Indies teammates, all-rounders Andre Russell and Odean Smith for the Season six of the competition to be held from November 23 to December 4. 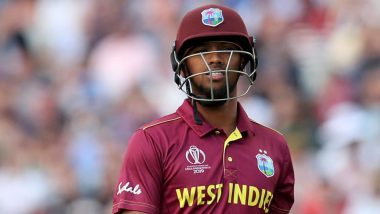 Abu Dhabi, Sep 25: West Indies white-ball skipper Nicholas Pooran on Sunday was announced as the new Icon Player for defending champions Deccan Gladiators ahead of the season six of Abu Dhabi T10 tournament. Pooran joins the ranks of his West Indies teammates, all-rounders Andre Russell and Odean Smith for the Season six of the competition to be held from November 23 to December 4. Pooran comes with extensive experience as a captain and more importantly as an attacking left-handed batter in white-ball formats apart from mastery behind the stumps.Formula E Car Unveiled at Durgam Cheruvu Cable-Stayed Bridge in Hyderabad

"I am quite excited to be part of the Deccan Gladiators for the coming season. I am honoured to have been adjudged the Icon Player and would give my best to perform as per the trust the team management has shown and the expectation bestowed on me. Looking forward to a thrilling season as we prepare to fight with full enthusiasm and renewed spirit as a team," said Pooran on the announcement.

Pooran has been a regular in the Indian Premier League (IPL) since 2019 and caught everyone's attention with his style of play for Sunrisers Hyderabad in IPL 2022 earlier this year. Apart from the IPL, Pooran has been a star performer in the Pakistan Super League (PSL), the Bangladesh Premier League (BPL), and the Caribbean Premier League (CPL). When it comes to Abu Dhabi T10 tournament, Pooran has a renowned track record as he led the Northern Warriors side to their second title in 2020. With a current strike rate of 130.77 in T20I, Pooran is adjudged as one of the most aggressive and power-hitting batsmen of current times.

The Gladiators have had already retained Russell, Smith, Tom Kohler-Cadmore, Zahoor Khan, and David Wiese for this season. The draft for the 10 over-a-side format which is over a 90-minute duration will be held on September 26. "We are delighted to welcome Nicholas Pooran to the growing Deccan Gladiators squad and to have him as our Icon Player for this season. His experience and skills as a match-winning all-rounder would help the team in planning the roadmap strategically."

"I'm sure the team would be inspired by him as we go ahead with full spirit for another exciting season. Looking forward to having a stronger bond with Pooran," said Gaurav Grover, Owner of Deccan Gladiators. The sixth edition of Abu Dhabi T10 tournament will be played at the Sheikh Zayed Cricket stadium, Abu Dhabi. Eight teams will fight for glory in the world's only 10-over cricket tournament sanctioned by the International Cricket Council (ICC) and licensed by the Emirates Cricket Board (ECB) for ten years.

(The above story first appeared on LatestLY on Sep 25, 2022 06:56 PM IST. For more news and updates on politics, world, sports, entertainment and lifestyle, log on to our website latestly.com).