Noted movie promotion company Freakout Entertainment has added another feather to its cap. 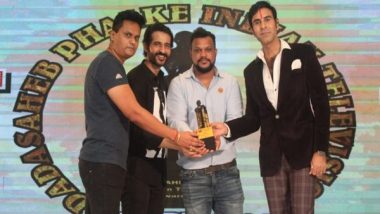 The firm has been awarded the prestigious Dadasaheb Phalke Indian Television Award 2021 as a mark of recognition for its contribution to the Indian film and television industry over the last nearly decade-and-a-half.

Freakout Entertainment was founded by Subodh Singh in 2008 to manage the personal Public Relations (PR) of a handful of Bollywood celebrities, including the music duo of Sajid-Wajid, actor Boman Irani, singer Richa Sharma, and actor Sahil Khan, among others.

Today, Freakout Entertainment has emerged as one of India's leading entertainment, artist, and celebrity management agency. It also has a global reach with offices in Dubai and London and plans to establish a presence in other markets with a significant Indian diaspora. The firm is also closely involved with the International Indian Film Academy (IIFA) Awards and other global events aimed at promoting the Indian film industry.

"We have received many accolades over the years, but being selected for the Dadasaheb Phalke Indian Television Award is special. We are thankful to the Indian film and TV industry for their constant support and encouragement," said Subodh Singh about the honour.