Get latest articles and stories on Business at LatestLY. The Indian stock markets key indices, Sensex and Nifty, closed in the red in a volatile session on Monday after the government announced a slew of fiscal measures on the weekend to ease inflationary pressure. 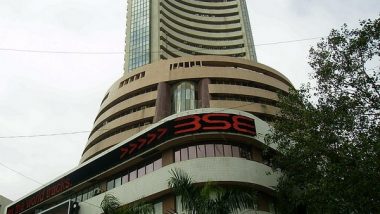 Mumbai (Maharashtra) [India], May 23 (ANI): The Indian stock markets key indices, Sensex and Nifty, closed in the red in a volatile session on Monday after the government announced a slew of fiscal measures on the weekend to ease inflationary pressure.

The markets witnessed a volatile session. The Sensex started the day on a positive note at 54,459.95 points. Volatility was seen in the markets from the morning itself. The Sensex slipped into the red in the early morning session hitting a low of 54,191.55 points. However, it made a strong recovery surging to a high of 54,931.30 points in the intra-day. The markets witnessed selling pressure towards the end of the trading session and ended the day in the red.

The benchmark Sensex had gained 1534.16 points or 2.91 per cent on Friday, the previous trading day.

The markets witnessed volatile trading after the government announced a slew of measures on the weekend to ease inflationary pressure.

On Saturday, Finance Minister Nirmala Sitharaman announced a cut in excise duty on petrol by Rs 8 per litre and on diesel by Rs 6 a litre. The duty cut has significantly brought down retail prices of these fuels. Retail price of petrol has come down by Rs 9.5 per litre and diesel has become cheaper by Rs 7 a litre. The move would help ease inflation, which has been above the Reserve Bank of India's tolerance limit for the past several months.

Metal stocks tumbled after the government imposed hefty duties on exports of steel-making raw materials like iron ore and pellets.

Metal stocks crashed after the government announced the imposition of hefty taxes on raw materials used for steel manufacturing.

On Saturday, the government announced upto 50 per cent increase in export duty on iron ore. Duties have been significantly increased on pellets and some other steel intermediaries.

The government has increased the duties on exports of these materials to boost domestic availability and curb price rise. (ANI)