Get latest articles and stories on Business at LatestLY. The company said Tata Motors' commercial vehicle business registered a 15 per cent growth in sales over Q2 FY22. For India business, domestic wholesales were at 93,651 vehicles, a surge of 19 per cent year-on-year. However, exports were at 6,771 vehicles, lower by 22 per cent affected by financial crisis in few export markets. 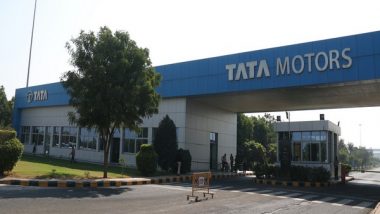 Mumbai (Maharashtra) [India], November 10 (ANI): Tata Motors has announced that its revenue went up 29.7 per cent to Rs 79,600 crore in revenue for the quarter ended September 2022 over the previous year's figures. The company said its operating profits or earnings before interest, taxes, depreciation, and amortisation was at 9.7 per cent, a jump of 130 basis points over last year's.

The company said Tata Motors' commercial vehicle business registered a 15 per cent growth in sales over Q2 FY22. For India business, domestic wholesales were at 93,651 vehicles, a surge of 19 per cent year-on-year. However, exports were at 6,771 vehicles, lower by 22 per cent affected by financial crisis in few export markets.

It also said domestic retails grew at a higher rate as compared to wholesales, which is a jump of 23 per cent YoY. The margin improvement was aided by higher volumes, realisations, although impacted by residual commodity inflation.

Tata Motors' said Jaguar Land Rover's revenue was £5.3 billion in the September quarter, up 36 per cent from last year's figures during the reviewed quarter.

Girish Wagh, Executive Director, Tata Motors, said: "In Q2 FY23 (second quarter of fiscal FY2022-23), the CV industry witnessed consistency in demand across segments. Our sharp focus on retail resulted in retail sales outperforming wholesale by 1.3 per cent during Q2 FY23. To better serve the evolving needs of our customers, we launched an efficient range of smart trucks in MHCV (medium and heavy commercial vehicle) and intermediate and light commercial vehicle (ILCV) segments, as well as best-in-class pickups, raising the benchmarks for safety, comfort, load carrying capacity while reducing their total cost of ownership."

The company said its passenger vehicle business continued its strong momentum with wholesales at 142,755 vehicles, a jump of 69 per cent YoY and 10 per cent quarter-on-quarter, amid strong festive demand and debottlenecking actions. Earnings before interest, taxes margins improved by 200 bps YoY to 0.4 per cent because of higher volumes, mix and improved realisations. However, margin recovery was impacted due to residual commodity inflation.

Girish Wagh said, "Going forward, we continue to remain in the agile mode and are keeping a close watch on the evolving geopolitical, inflation and interest rate risks on both supply and demand. We will drive the business on 'Demand Pull' by focusing on customer connect, product innovation, service quality and thematic brand activations thereby improving customer affinity for our brands, step up registration market shares sustainably, and improve realisations and profitability." (ANI)