After that Tahir's house was searched and evidence was gathered. Police are conducting raids and trying to arrest him as soon as possible," he added. 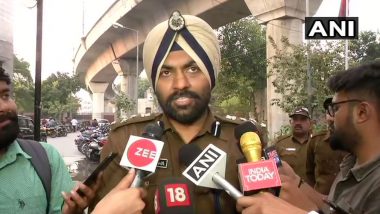 New Delhi, March 3: Delhi Police on Tuesday said that attempts are being made to arrest expelled AAP Councillor Tahir Hussain as soon as possible. "There are some media reports that Tahir Hussain (expelled AAP Councillor) was rescued by police. The fact is that on February 24 night we received information that a Councillor is trapped and surrounded but when police checked he was found at his home," Delhi Police PRO MS Randhawa said here.

"On February 26, when IB officer Ankit Sharma's body was found and his family made allegations, Tahir became the main accused. After that Tahir's house was searched and evidence was gathered. Police are conducting raids and trying to arrest him as soon as possible," he added. Tahir Hussain, AAP Councillor Accused in IB Official Ankit Sharma's Murder, Suspended From Party's Primary Membership.

An FIR was registered against Hussain for allegedly murdering Intelligence Bureau (IB) officer Ankit Sharma, whose body was recovered from North-East Delhi's Chand Bagh area here on February 26. The FIR was registered at Dayalpur Police Station based on the complaint of Sharma's father Ravinder Kumar.

Along with Section 302 (punishment for murder), the FIR also mentions Section 201 (disappearance of evidence) of the Indian Penal Code (IPC). At least 47 people including a Police Head Constable and Sharma have died while around 200 people sustained serious injuries in the violence that raged for three days in the North-East Delhi.