Bappi Lahiri Birth Anniversary: Did You Know That the Singer's Name is in Guinness Book of World Records? 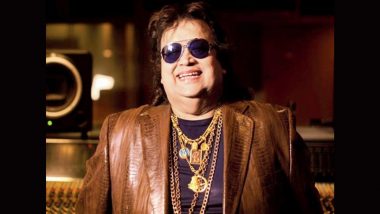 Known as the 'Disco King' of the Indian music industry, Bappi Lahiri's contributions to the music industry have been etched into our hearts. On the occasion of his birth anniversary, let's run through the pages of his glorious life. One lesser-known fact about the evergreen persona is that he held a Guinness World record! Bappi Lahiri Birth Anniversary: 5 Songs Of The Legendary Composer That Prove He Is More Than Just Disco King.

Bappi Da, as he was fondly addressed, made more than 9,000 songs during his time in the industry. And, 1986 happened to be his year. In 1986, Bappi Da sang 180 songs in 33 films which got him in the Guinness Book of World Records! In fact, his famous song 'Jimmy Jimmy Aa Jaa' holds the world record for being dubbed in 45 foreign languages. Most recently, the song became the new anthem for people in China to protest Covid lockdowns. China: Bappi Lahiri’s Superhit Song ‘Jimmy, Jimmy’ From Disco Dancer Movie Becomes New Anthem for Chinese To Protest COVID-19 Lockdowns (Watch Video).

Several videos went viral on TikTok and other social media platforms in which Chinese facing the lockdowns are seen using Bappi Da's track to express their anger and frustration over the country's stringent zero-COVID policy. Another lesser-known fact about him is his stint in politics. Bappi Da joined the Bharatiya Janata Party (BJP) on January 31 2014, in the presence of Rajnath Singh, the then-national President of the Bharatiya Janata Party, to contest the 2014 Lok Sabha election. He was made a BJP candidate from Srerampur (Lok Sabha constituency) in 2014, however, the musician lost to Kalyan Banerjee of All India Trinamool Congress.

Born as Alokesh Lahiri on November 27, 1952, in Jalpaiguri, West Bengal, he was part of a family with a rich tradition in classical music. His father, Aparesh Lahiri was a famous Bengali singer and his mother, Banshori Lahiri, was a musician-singer who was well-versed in classical music and Shyama Sangeet. He was their only child. At the mere age of three, Bappi Da started to play the table and went on to keep learning different instruments like saxophone and guitar. His maternal uncle, legendary Indian singer Kishore Kumar, along with his parents were a huge part of making music such an indispensable part of Bappi Da's life.

After initially being trained by his parents, he received his first opportunity in a Bengali film, 'Daadu' (1972) at the age of 19. The first Hindi film for which he composed music was 'Nanha Shikari' (1973) and his first Hindi composition was 'Tu Hi Mera Chanda' sung by Mukesh. In late 2016, Bappi Da lent his voice to the character of Tamatoa in the Hindi-dubbed version of Disney's 3D animated fantasy adventure film 'Moana'. For the film, he also composed and sang 'Shona', the Hindi version of 'Shiny'. This was his first time dubbing for an animated character. At the 63rd Filmfare Awards, he won the Filmfare Lifetime Achievement Award.