American rapper and songwriter Cardi B has honoured the life of beloved fashion designer Thierry Mugler following news of his death at 73. 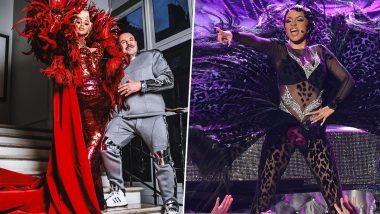 American rapper and songwriter Cardi B has honoured the life of beloved fashion designer Thierry Mugler following news of his death at 73. According to People magazine, Cardi recently shared a series of images on Instagram that showed her wearing Mugler's designs while performing and on the red carpet over the years. Cardi B Reacts After Winning Defamation Lawsuit Against YouTuber Tasha Kebe.

She recalled that the French innovator was "one of the FIRST designers to take a major chance on me" remembering their first fashion collaboration at the 2019 Grammys when she dropped jaws on the red carpet. She wore a vintage 'Venus' Mugler gown, featuring a blush satin and velvet skirt, sequin bodysuit, matching gloves and pearl embellishments, pulled straight from the archives from the label's Fall 1995 Couture collection. Cardi B Wins Million-Dollar Defamation Suit Against ‘Malicious’ YouTuber Sued for Hurting Her Reputation by Posting Fake Content.

"Over the years me, him and Kollin [Carter] created even more fashion moments but nothing tops being able to finally meet him in person last year in Paris at his museum exhibit," she wrote. Cardi continued, "It's so crazy because I was second-guessing if I should go the whole time leading up to that trip. I had just given birth to my son like three weeks prior and wasn't feeling 100% like myself but something in my spirit kept saying 'GO.'"

She added, "Maybe God knew that if I didn't go then I may have never had the opportunity to thank him for everything he did and the doors he opened for me." Cardi concluded her tribute by calling Mugler "a true inspiration for all of us." Her relationship with Mugler began after her stylist Kollin Carter direct messaged the brand on Instagram when on the hunt for her Grammys look.

Mugler's passing was announced on his Instagram account on Sunday with a black square and a statement written in both French and English.