Get latest articles and stories on Entertainment at LatestLY. The attack on American stand up comedian Dave Chappelle, which happened earlier this month at The Hollywood Bowl, might have happened due to the same reason that people assumed. 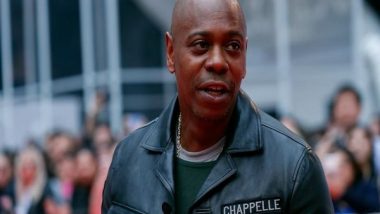 Washington [US], May 24 (ANI): The attack on American stand up comedian Dave Chappelle, which happened earlier this month at The Hollywood Bowl, might have happened due to the same reason that people assumed.

According to The Hollywood Reporter, the attacker, Isaiah Lee, who was an audience member and was arrested on suspicion of assault after he allegedly charged the comedian on stage, has said in an interview that he was offended by Chappelle's jokes.

Also Read | Shanaya Kapoor Is Pretty as She Flaunts Her Flawless Beauty in a Latest Selfie!.

He went on to claim that he was there to have fun but Chappelle made jokes which included controversial comments about the LGBTQ community, in addition to making jokes about homelessness. Lee stated he himself has experienced homelessness. "It's a struggle, and I wanted Dave Chappelle to know it's not a joke," he said and later also added that he does not regret his actions.

Lee faces four misdemeanours, but Los Angeles District Attorney George Gascon has declined to file felony charges, as per The Hollywood Reporter. Since the incident, though Chappelle has largely joked about the matter during his performances, it has drawn widespread condemnation, even among some of the comedian's critics. (ANI)