American singer Lily Allen and actor David Harbour who are yet to officially tie the knot have obtained a marriage license in Las Vegas. 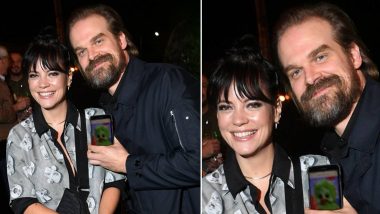 American singer Lily Allen and actor David Harbour who are yet to officially tie the knot have obtained a marriage license in Las Vegas. According to court records obtained by Fox News, the pair was spotted in Las Vegas obtaining the marriage license and are on their way to becoming man and wife. Allen, 35 and Harbour obtained their marriage approval on September 6, which gives them time allotted up to a year from the date of receipt of their license to officially wed. Brittany Snow Says She Is Lucky to Marry Beau Tyler Stanaland Just Before COVID-19 Lockdown (View Post)

The quiet couple do not appear to have picked up a marriage certificate yet. In May, the 'Smile' songstress shared a laundry room selfie in which she seemingly confirmed her engagement to Harbour. "First rule of engagement club ........." she responded to a curious fan who probed her about the sparkler. In November, Allen was first photographed wearing the ring and they both have been silent about their relationship status, despite being spotted at sporting events and industry shindigs in the US and abroad. Justin Bieber Was Doubtful to Marry Hailey Baldwin Over Fears That He Would Cheat

Harbour showcased the pair in an Instagram photo in October, where they were seen rocking their Halloween costumes while enjoying time together at Disney's Magic Kingdom. "The prince, princess and the parking lot. That seven dwarves mine ride is the best one in the whole d--n park. Go on, fight me," he captioned the snap. If Harbour and Allen make their way to the altar, the nuptials will mark her second marriage. As reported by Fox News, Allen was previously married to Sam Cooper in 2011 and the pair welcomed two daughters - 7-year-old Marnie Rose, and 8-year-old Ethel Mary. They endured a two-year divorce before finalising matters in June 2018.