Miss Universe Harnaaz Sandhu Opens Up About Being Body Shamed, Says ‘I Was Bullied for Gaining Weight’

Miss Universe 2021 Harnaaz Sandhu opened up about being body shamed by many for gaining weight. Harnaaz is the first Indian woman to secure the Miss Universe win in 21 years after Lara Dutta won the pageant in 2000. 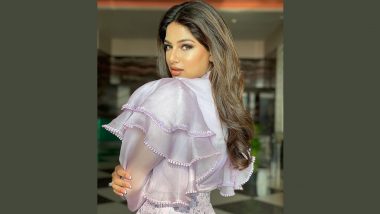 Miss Universe 2021 Harnaaz Sandhu opened up about being body shamed by many for gaining weight. Speaking to People, Harnaaz said, "Physically I have kind of grown, got more pounds and increased my weight, which I am totally comfortable about right now. I was bullied for gaining weight. It was kind of uncomfortable and really surprising for me to see how people started having their opinions, which should not really matter." Miss Universe Harnaaz Sandhu Talks About Her Bollywood Debut Plans, Says ‘I Want to Be an Actress Who Is Very Influential’.

She added, "It's not about how you look, it's about who you are from inside and how you treat people and what you believe in." Harnaaz also said that she broke down several times after seeing people's negative comments. "I definitely broke down so many times. Sometimes in the most unexpected times. I'm just about to go on stage or something and this whole thing comes in my mind. It's really sad," she admitted.

The Chandigarh-based model is suffering from celiac disease, an immune reaction to eating gluten, a protein found in wheat, barley, and rye. "I have a gluten allergy. I can't have wheat or anything which contains wheat. Apart from that, I also have some soy allergy and coconut allergies. I'm allergic to eggs and I kind of realised that when I came to New York. Because (eggs are considered) vegetarian and it's known as non-vegetarian in India. It took me time to realize that the things which I was allergic to, I was still having. I didn't know," she shared.

Now that the 22-year-old has gotten a grasp on her health, her mindset has shifted. ""I've gone through that phase of my life where I used to feel bad about everything," Sandhu says. "Now, I started loving everything. It's okay to cry. It's okay to feel sad." Harnaaz Sandhu and Andrea Meza Set Instagram on Fire As They Groove on Badshah’s Song ‘Voodoo’ (Watch Video).

Sandhu hopes sharing her story will help others who struggle with body image and self-love. "We all are imperfect. We need to realize that there's a point where we understand that we need to embrace our flaws and when you do that, you can conquer anything in this world," she concluded.

Harnaaz is the first Indian woman to secure the Miss Universe win in 21 years after Lara Dutta won the pageant in 2000.