Actor Orlando Bloom is on the ground in Moldova, supporting families who have fled from Ukraine amid the ongoing Russia-Ukraine crisis. 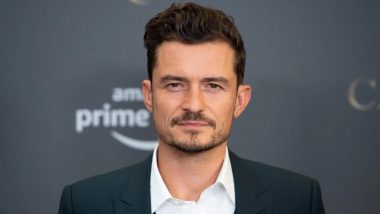 Actor Orlando Bloom is on the ground in Moldova, supporting families who have fled from Ukraine amid the ongoing Russia-Ukraine crisis. According to People Magazine, Bloom, 45, who has been a UNICEF Goodwill Ambassador since 2009, took to his Instagram handle and discussed meeting a mom of three who evacuated Ukraine with her kids. Oscar-Winning Composer Hans Zimmer Pauses UK Concert to Show Support For Ukraine.

"Today, on the border, I met a mother and her three children who fled Ukraine last night after their neighbour's house was bombed. They don't know where they will go next, but Mum just wants her children to be safe," a part of the caption read. In the comment section, Bloom's pop-star fiancee Katy Perry wrote, "Thank you for being a great human." Ram Charan Sends Medicine, Money and Other Essentials to a Member of His Security Staff in Ukraine (Watch Video).

On February 24, Russia began a special military operation in Ukraine after the Donetsk and Luhansk people's republics requested help in defending themselves. What followed the military operation was a slew of sanctions imposed by the western countries targeting the Russian economy.