The Big Cigar is an upcoming limited series that will contain six episodes and will air on Apple TV+. The series will have Andre Holland co-starring with Alessandro Nivola and Don Cheadle will be directing. The series will focus on how Newton relied on Bert Schneider to escape to Cuba from a nationwide manhunt, while being pursued by the FBI. 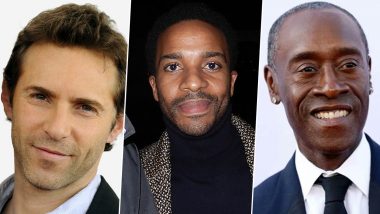 Alessandro Nivola and Andre Holland will co-star in the six-episode limited series The Big Cigar on Apple TV+, which will chronicle the tale of Black Panther leader Huey P. Newton's flight to Cuba. According to Deadline, Don Cheadle will direct and executive produce the first two episodes, while Janine Sherman Barrois, who won the NAACP Image Award, will serve as showrunner and executive producer. Holland will star as Newton in the series. Tiffany Boone is another member of the burgeoning supporting cast. Secret Invasion: Samuel L Jackson Confirms Don Cheadle Set to Return in His Disney+ Marvel Series!

The Big Cigar tells the extraordinary, hilarious, almost-too-good-to-be-true story of how Newton relied on Bert Schneider (Nivola), the Hollywood producer behind Easy Rider, to elude a nationwide manhunt and escape to Cuba while being pursued into exile by the FBI. The first episode was written and executive produced by Jim Hecht and is based on the eponymous Playboy article from Joshuah Bearman.

The show is produced by Warner Bros. Television, which has an overall arrangement with Sherman Barrois and her Folding Chair Productions. Through their production business Epic, a branch of Vox Media Studios, Hecht and Sherman Barrois, along with Bearman, Joshua Davis, and Arthur Spector, serve as executive producers for the drama.

JC Chandor's Marvel movie Kraven The Hunter, in which Nivola starred alongside Russell Crowe, Aaron Taylor Johnson, and Ariana DeBose, has finished filming. The Boston Strangler, in which he co-starred with Keira Knightly, Jeff Baena's independent comedy Spin Me Round, starring Alison Brie and Aubrey Plaza, and Noah Baumbach's White Noise, featuring his two daughters Sam and May Nivola, are some of the other movies that have been released this year.