The now Manchester United player had moved to England in January this year for 47 million pounds. 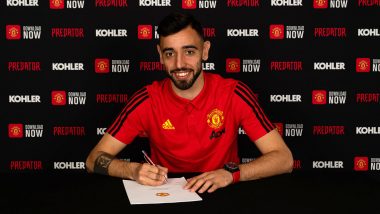 Leeds [UK], May 6: The apex football body, FIFA is investigating Bruno Fernandes' transfer to Manchester United. FIFA has decided to look into the matter as Fernandes' former club Sampdoria lodged a complaint claiming that they are still owed money from a sell-on clause. The now Manchester United player had moved to England in January this year for 47 million pounds, but Sampdoria, who sold the midfielder to Sporting C.P. three years ago, are now arguing they should have been paid around 4 million euros of the transfer fee due to a 10 per cent sell-on clause. Have Joined Manchester United Because I Want to Win Trophies: Skipper Harry Maguire.

"We can confirm that on 3 April 2020 the Italian club, UC Sampdoria, lodged a claim with FIFA against the Portuguese club, Sporting Clube de Portugal, related to financial obligations set out in the contract corresponding to the transfer of the Portuguese player, Bruno Miguel Borges Fernandes," Goal.com quoted a FIFA spokesperson as saying. Cristiano Ronaldo Had Said ‘Yes’ to Alex Ferguson for a Manchester United Return, Says Patrice Evra.

"The matter is currently being investigated and consequently we cannot provide further comments," he added.25-year-old Fernandes had spent one season at Sampdoria before signing for Sporting in 2017. Ever since joining Manchester United, Fernandes has had an immediate impact and has been credited for turning around the fortunes of the team. Currently, all sporting action across the world has come to a halt due to the coronavirus pandemic. The Premier League was suspended in March this year due to COVID-19.