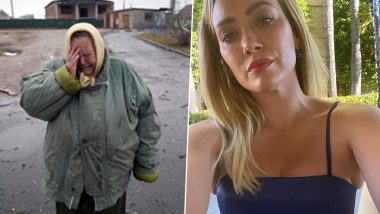 American actor-singer Hilary Duff recently criticised Russian President Vladimir Putin for the country's invasion of Ukraine. In an emotional post about what the Ukrainian people are going through, Hilary said that she is "feeling helpless and gutted." The 'How I Met Your Father' actor took to her Instagram account to slam Putin along with sharing some heart-breaking pictures of individuals crying in the war-ravaged region. Russia-Ukraine Conflict: PM Narendra Modi Speaks to Russian President Vladimir Putin.

In the post, Hilary wrote, "GREED. Fuc---g Putin. I hope his existence is so LONELY and TORTURED and EMPTY. Money doesn't make people happy. It can make your life easier but my only hope is by the grace of god his life is a miserable one. Watching the news is excruciating. I can't imagine day after day of this reality ...Fear. Loss. Losing everything you love and have worked hard for,separating from your family or watching them die. Not being able to lay them to rest. No safety. No food."

The actor acknowledged the people of Ukraine, saying they have "pride and strength" that not even she could think to muster. She also spoke about the reports of increased human trafficking as a result of the war. She wrote, "These Ukrainian people have some pride and strength I don't think I could muster. I'm now hearing human trafficking is an issue for women and children escaping the country. Vladimir Putin Asks Upper House To Approve Use of Russian Army Outside Russia.

I'm just sobbing thinking about this. Escaping one hell to another. Why and how can the world be this way? How can humans do these things to one another ? Feeling helpless and gutted and angry and really just wanted to share. I'm seriously sad for the people of Russia too. I can't imagine they want to be involved in this. #Ukraine."

Several celebrities including Mila Kunis, Cardi B, Lady Gaga, Andrew Garfield, Mark Ruffalo and Ryan Reynolds have expressed their support for Ukraine.Recently, Meghan Markle and Prince Harry made donations to numerous charities in Ukraine. On February 24, Russia began a military operation in Ukraine, responding to calls for help from the breakaway republics of Donetsk and Luhansk in countering the aggression of Ukrainian troops.