Omicron Variant in India: Out of 2, One is South African, Second a Local with No Travel History

As his sample had low cycle threshold (Ct) value it was sent to NCBS lab, and the report has come today as positive, he said. "He was initially kept under home isolation and was subsequently shifted to hospital. He is a local person without any travel history. He is stable and is recovering there are no concerns, he is under watch." 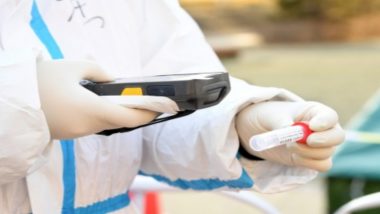 Bengaluru, December 2: Out of two cases of the new Omicron variant of coronavirus that have been detected in the city, one is a South African national who has left the country after testing negative, while the other is a local with no travel history, Bruhat Bengaluru Mahanagara Palike (BBMP) said on Thursday. The city civic body said five contacts of the local person have also tested positive and their samples have been sent for genomic sequencing.

According to officials, both the persons who have tested positive for Omicron were vaccinated with two doses of COVID vaccine. "Please note that second person has no travel history, so there may be chances of more people having the infection. There is need to be vigilant about the this new variant," BBMP Chief Commissioner Gaurav Gupta said.

Speaking to reporters here, he said the administration is in constant consultation with experts regarding measures to control the spread of this virus, and "I only say precautionary measures have to be borne in mind, they are same for any variant." New COVID-19 Variant Omicron Seems To Be Very Transmissible, Can Be Detected Soon, Says Top Indian Virologist Dr Gagandeep Kang.

"Naturally after these cases have come across there is need to take more measures, which will be decided by the government after considering all aspects and consulting experts," he added. Sharing details of the Omicron variant cases, Gupta said, the first is a 66-year-old male, who is a South African national.

"He had come come here (Bengaluru) on November 20, his samples were collected at the airport and subsequently he tested positive. His samples were sent for genome sequencing the reports of which have come today confirming he was infected by Omicron," he said.

Further noting that the person was isolated in a hotel, and was subsequently tested separately at another laboratory, during which his reports came negative, the Commissioner said, he left the country for Dubai on November 27, as per his pre-decided schedule.

All his 24 primary contacts and 240 secondary contacts have tested negative, he said, adding that "but they are still kept under watch." Regarding the second person, a 46-year-old male, Gupta said, his samples were collected on November 22, following which he tested positive.

As his sample had low cycle threshold (Ct) value it was sent to NCBS lab, and the report has come today as positive, he said. "He was initially kept under home isolation and was subsequently shifted to hospital. He is a local person without any travel history. He is stable and is recovering there are no concerns, he is under watch."

Not willing to divulge details about the second case, in response to a question, he said, "We cannot say he is hospital staff, he is from Bengaluru." The commissioner also said that that samples of all international travellers who have tested positive, and positive cases with low Ct value are being sent for genome sequencing and are obtaining their results within about a week's time.

City's Bowring Hospital has been identified for treating Omicron cases, he said. "Very less is known about this virus, according to South African doctors it is easily transmissible, but may be milder."