In a statement, the Chief Minister said that women were the beneficiaries of 66 percent of the welfare schemes. 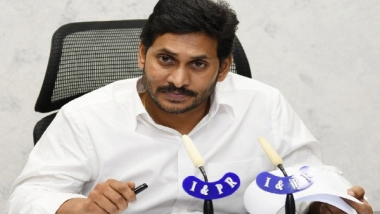 Amaravati, May 30: On his government's two-year anniversary, Andhra Pradesh Chief Minister YS Jagan Mohan Reddy on Sunday claimed that 94.5 percent of promises made in the party's election manifesto had been fulfilled. In a statement, the Chief Minister said that women were the beneficiaries of 66 percent of the welfare schemes.

While releasing a letter titled 'Rendo Yeta Ichhina matake pedda peeta' (Second year too, prominence to promises made) and a document "Maliyedu- Jagananna Thodu, Jagananna Manifesto 2019" on the occasion of completion of two years of governance, Reddy said that out of 1,64,68,591 households in the state, 1,41,52,386 households had been benefitted by the state government's schemes. Andhra Pradesh CM YS Jagan Mohan Reddy Launches Women's Safety App 'Abhayam' in Visakhapatnam.

"Rs 95,528 crore has been directly given to the people through Direct Benefit Transfer (DBT) schemes and another Rs 37,197 core indirectly through other various schemes like YSR Arogyasri, Jagananna Thodu, Gorumudha, and YSR Sampoorna Poshana, totaling to 1.31lakh crore," the statement added.

Reddy also thanked every village/ward volunteer, employees, ward secretariats and government employees for the successful implementation of the schemes.

In the 2019 Andhra Pradesh Assembly polls, YSRCP registered a landslide victory by winning 151 seats out of a total of 175, thus wresting power from N Chandrababu Naidu. TDP's number reduced drastically from 102 to 23 seats. The Congress and the BJP drew a blank in the state.