Get latest articles and stories on India at LatestLY. Congress leader Rahul Gandhi on Sunday condemned the 'vicious' attack on party leaders and workers allegedly by BJP goons following Congress' win in the Agartala assembly bypoll. 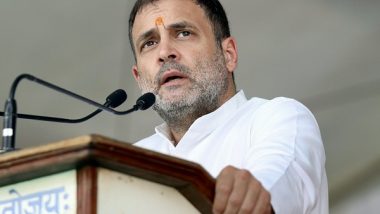 "I strongly condemn the vicious attack on our leaders and workers by BJP goons following @INCIndia's win in the Agartala bypoll. The people are with us. Shameful that the police stood as mute spectators instead of stopping the attack. These BJP goons must be brought to justice," Rahul Gandhi tweeted.

Earlier today, the Congress party tweeted pictures of Tripura Congress party chief Sudip Roy Burman and wrote on Twitter, "Frustrated by our good performance in the by-elections and the historic victory of Shri Sudip Roy Burman ji, the BJP has now turned to hooliganism and violence. This bloody politics is the real face of Bharatiya Janata Party."

Counting of votes was completed in Tripura bypolls in four Assembly constituencies on Sunday. Bharatiya Janata Pary won 3 out of 4 constituencies and Congress bagged one. Chief Minister and BJP candidate Manik Saha won in Town Bordowali while Sudip Roy Barman secured the Agartala seat for Congress.

Voting for the Tripura bypolls in four Assembly constituencies took place on Thursday.

The fate of many bigwigs including Tripura Chief Minister Manik Saha was sealed today as the counting of votes took place for three Lok Sabha and seven assembly seats spread across five states.

Counting began at 8 am under heavy security arrangements. The postal ballots were counted first and then EVMs were opened. The three Lok Sabha seats which witnessed bypolls include Azamgarh and Rampur in Uttar Pradesh and Punjab's Sangrur, while assembly by-elections were held in Tripura, Jharkhand, Andhra Pradesh and Delhi.

"Lodhi has won by over 42,000 votes," Rampur District Magistrate Ravindra Kumar told reporters after giving the winning certificate to Lodhi.

As per the current trends, Simranjit Singh Mann of SAD (Amritsar) has won from Punjab's Sangrur Lok Sabha seat. Sangrur Lok Sabha seat was vacated by Bhagwant Mann who came to power as the state chief minister after the Aam Aadmi Party secured a landslide victory in the recently-held assembly polls in Punjab. (ANI)