Former Jharkhand Chief Minister and BJP leader Babulal Marandi demanded that strict action be taken against the Senior Superintendent of Police (SSP) of Dhanbad Sanjeev Kumar for negligence in the case of alleged killing of Additional District Judge Uttam Anand. 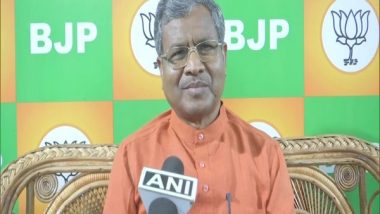 "I have written a letter to Chief Minister Hemant Soren. Action should also be taken against Sanjeev Kumar, Senior Superintendent of Police of Dhanbad. He should be suspended," said the BJP leader.

"SSP's previous record remains in question. When he was SP of Palamu district, an elderly couple was kidnapped. That case is still not solved. Despite this, he was promoted and made SSP of Dhanbad. Because of this incompetent officer crime is rising in that area. Hence stringent action should be taken against him," he added.

Jharkhand government on Saturday recommended a Central Bureau of Investigation (CBI) probe in the alleged killing of the Additional District Judge in Dhanbad.

This comes after Additional District Judge Uttam Anand posted in the Dhanbad district of Jharkhand was killed after being hit by a vehicle on Wednesday.

"The state government took this decision after the matter was raised in Supreme Court," said Marandi.

On Thursday, two people involved in the alleged killing were arrested, and the auto used for the crime has also been seized. The accused, identified as Lakhan Kumar Verma and Rahul Verma, confessed to the crime, said Amol Vinukant Homkar, Inspector General (Ops).

As per an official statement from the state government, an SIT was formed to probe into the incident.

Chief Minister on Saturday met the relatives of the deceased judge. The relatives had requested Hemant Soren to provide his wife with a job on compassionate grounds and expressed satisfaction over the formation of an SIT for the probe. (ANI)