She is contesting from New Generation People's Party. 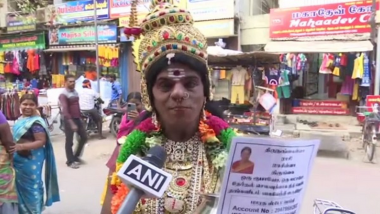 Madurai, March 22: Bharathi Kannama, a Transgender woman, who is contesting in the upcoming Tamil Nadu Assembly elections from Madurai South constituency has promised to make Madurai a model city. She is contesting from New Generation People's Party. Bharathi speaking to ANI said, "I am proud to be contesting in election as a transgender for the first time in India."

Bharathi has contested for Lok Sabha seat in 2014 and 2019 from Madurai Constituency, while in 2019, her nomination for Lok Sabha got rejected. In both times, Bharati contested as an Independent Candidate. For the very first time, she is contesting for an Assembly seat from Madhurai South. Tamil Nadu Assembly Elections 2021: MK Stalin Says ‘If Elected, DMK Will Dedicate First 100 Days of Govt To Solve People’s Issue’.

She said that she will offer a government job per family after she becomes an MLA. "I will provide one government job to every family once I win in the elections. Everyone will get ration enough for 3 meals a day. I will come up with a restaurant plan," she told ANI. She further said that medical assurance will be provided if she is voted as MLA for the Madurai South assembly seat.

Further speaking Mohammed, a local resident, said that this country holds more misconceptions about transgender people. "I have lived in this area for a long time. Bharathi Kannamma is doing a lot of social services. Everyone should vote to Bharathi Kannamma."