The resident had spotted the bodies, including a half-burnt corpse, under a bridge on the Yamuna on May 6, according to an official. 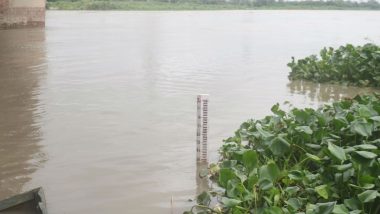 Lucknow, May 10: Local residents in Hamirpur district spotted five bodies floating in the Yamuna, creating a scare that these were of COVID patients, an apprehension dismissed by the authorities. The resident had spotted the bodies, including a half-burnt corpse, under a bridge on the Yamuna on May 6, according to an official.

"After speaking to people and looking at the bodies, prima facie, it can be said these were not of COVID-19 patients as these were draped in a traditional manner and no body was wrapped as done in the case of COVID-19 victims," District Magistrate Gyaneshwar Tripathi said in a statement. He said all bodies were cremated with full respect. Uttar Pradesh: Body of Monk Found in Yamuna River, Three Sadhu Found Dead in One Month.

The DM said local residents told police that people immerse bodies of their family members who die during the current "Panchak Nakshatra" and refrain from cremation.

The DM said some local fishermen told them that people generally tie a body to boulders and heavy stones before immersing it in the river. At times, bodies that are not completely burnt are also immersed in the river, the DM said.

But this time, due to shallow water, the bodies came to the surface of the river, triggering panic among people, he said. The upper riparian district of Kanpur has been informed to take necessary action in this regard while the Hamirpur police has been deployed to keep a vigil, he said.