Union External Affairs Minister S Jaishankar will make a statement on the prevailing situation in Ukraine at 2.30 pm in Rajya Sabha today. 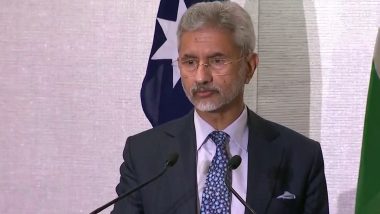 In the second part of the Budget Session in Parliament, Jaishankar will speak on the rescue operation to evacuate Indian students from the war zone in Ukraine and what is India's stand vis-a-vis the conflict between Russia and Ukraine. Russia-Ukraine Crisis: Over 2,500 Mariupol Residents Killed Since War Began.

The Central government launched 'Operation Ganga' on February 24 to bring back stranded Indians from Ukraine.

During the operation, buses and trains brought Indians to the western borders of Ukraine and they were flown to India via locations like Bucharest, Budapest, Suceava, and Warsaw.

The last batch of over 600 students who were evacuated from Sumy was brought back to India via Poland.

In recent months, 'Operation Ganga' has been India's largest evacuation drive to bring back stranded Indians after operation 'Devi Shakti' was launched by the Narendra Modi government in Afghanistan last year.