PM Modi also recalled the contributions of the women freedom fighters of India. The prime minister said that every Indian is filled with pride when they remember the strength of the women of the country - be it Rani Laxmibai, Jhalkaribai, Chennamma, Begum Hazrat Mahal. 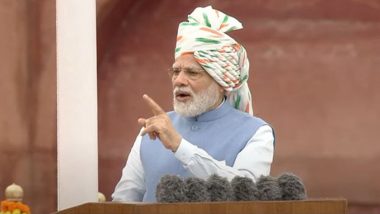 Here Are the Top Quotes From PM Modi's Speech at the Red Fort While Addressing the Nation:

1. Prime Minister Narendra Modi paid homage to the freedom fighters who fought against British rule. "Our country is grateful to Gandhiji, Bhagat Singh, Rajguru, Ramprasad Bismil, Rani Laxmi Bai, Subash Chandra Bose, and all other freedom fighters who shook the foundations of the British Empire. We salute not only those who fought for freedom, but also the architects of free India such as Jawaharlal Nehru, Ram Manohar Lohia and Sardar Vallabhai Patel, amongst the many others," PM Modi said.

The Prime Minister also said that India has been home to great thinkers like Vivekanand, Aurobindo and Rabindranath Tagore. "Our heroes like Rajendra Prasad, Jawaharlal Nehru, Shyama Prasad Mukherjee, Lal Bahadur Shastri fought for our independence and moulded our country," he said. Independence Day 2022: India's 'Techade' Is Here, Wait for 5G Is Over, Says PM Narendra Modi.

PM Modi also recalled the contributions of the women freedom fighters of India. The prime minister said that every Indian is filled with pride when they remember the strength of the women of the country - be it Rani Laxmibai, Jhalkaribai, Chennamma, Begum Hazrat Mahal.

2. Prime Minister Narendra Modi called for unity among people while pointing out that sometimes the country's talent is restricted by its language barriers, urged countrymen to be proud of every language. "Sometimes our talent is restricted by language barriers. This is an example of Imperialism. We need to be proud of every language in our country. When we are connected to our roots, then only can we fly high; and when we fly high, we will provide solutions to the entire world," asserted the Prime Minister in his address to the nation today.

3. Prime Minister said that natural farming will give new strength to India. "There are multiple employment opportunities opened with creation of Green Jobs," he said. "Jai Jawan, Jai Kisaan, Jai Vigyaan, Jai Anusandhan - as we celebrate 75 years, we need to follow this mantra that was given to us by Lal Bahadur Shastri and later tweaked by Atal Bihari Vajpayee," the PM said.

4. Prime Minister Narendra Modi took aim at the evils of nepotism and corruption and sought the people's cooperation to fight them. The prime minister said that the country needs to shift its mentality from "Bhai-Bhatijawad" and Parivaarwad (nepotism) and give an opportunity to the citizens who deserve it. Independence Day 2022: PM Narendra Modi Mentions Jawaharlal Nehru After Veer Savarkar During His Speech From Ramparts of Red Fort (Watch Video).

Addressing the country from the ramparts of the Red Fort on the country's 76th Independence Day, the Prime Minister said that there is no place for corruption in our society and that the people of the country need to come together as a society to punish those who have propagated the evil of corruption. "Today the nation shows anger towards corruption, but not the corrupted. Until and unless, people have the mentality of penalizing the corrupt, the nation cannot progress at optimum pace," Prime Minster Modi said.

"Another evil we need to come together against is nepotism. We need to give opportunities to those who are talented and will work towards the progress of the nation. Talent will be the basis of a New India. To cleanse every institute of India, let's shift our mentality from 'Bhai Bhatijawad' and Parivaarwad and give an opportunity to the citizens who deserve it," said PM Modi on the occasion of the country's 76th Independence Day. Though India is faced with numerous challenges and restrictions, the PM highlighted that the country has the ability to overcome them all for a New India.

5. Prime Minister Narendra Modi urged the youth to dedicate the next 25 years of their lives for the development of the nation and highlighted five resolves to accomplish the same.

The Prime Minister said, "When dreams are big, the hard work is equally strenuous. We need to be inspired by the sankalp and determination of our freedom fighters who dreamt of a free India. I urge the youth to dedicate the next 25 years of their lives for the development of the nation. We will work towards even the development of the entire humanity. That is the strength of India." Independence Day 2022: Indian Army, Navy, Air Force Celebrate I-Day; See Pics Inside.

6. Referring to 'Har Ghar Tiranga' campaign, PM Modi said, " The nation's enthusiasm for Tiranga seen in the last three days could not have been imagined by many experts and it symbolises the nation's reawakening.

7. PM Modi also asked the citizens to focus on 'Panchpran.' He said, "In coming years, we've to focus on 'Panchpran'- First, to move forward with bigger resolves and resolve of developed India; Second, erase all traces of servitude; Third, be proud of our legacy; Fourth, strength of unity and fifth, duties of citizens which includes the Prime Minister and Chief Ministers.

8. PM Modi also mentioned digital India in his speech from Red Fort. He said, "Today, we are seeing the Digital India initiative, startups grow in the country, and a lot of talent is coming from Tier 2 & 3 cities. We have to believe in our abilities."

PM Modi said India's "techade" is here as the government is focusing on technologies such as 5G, semiconductor manufacturing and optical fibre cables. These technologies, PM Modi said, will bring about a revolution at the grassroots level.

9. PM Narendra Modi gave a powerful message to the nation to take a pledge to stop disrespecting women. He said, "It's important that in speech and conduct, we do nothing that lowers the dignity of women."

"I have one request to every Indian. Can we change the mentality towards our women in everyday life. Pride of Nari Shakti will play a vital role in fulfilling the dreams of India. It is important that in our speech and conduct, we do nothing that lowers the dignity of women. Respect for Women is an important pillar of India's growth. We need to support our 'Nari Shakti'," PM Modi said.

10. PM Modi said, "When such an aspirational society exists, governments too have to work on the knife's edge to fulfill these aspirations. Community spirit has risen again in the last few years. For the last three days the entire country has marched with the Tricolour." Independence Day 2022 Wishes: PM Narendra Modi Extends Greetings to Citizens on India's 76th I-Day.

11. The Prime Minister said that 'India is the mother of democracy.' "India has seen a lot of ups and downs in the last 75 years. There have been sorrows as well as achievements in these years. We faced natural calamities, wars and other problems. But unity in diversity became our guiding power," PM Modi said.

12. Prime Minister Narendra Modi urged the people to support and promote sports and praised India's 'stellar' performance in the recently concluded Commonwealth Games 2022. "Our stellar performances at international sporting events are an example of India's shining talent. We need to promote and support such talent," PM Modi said.

In his address for the 76th Independence Day at the Red Fort, Prime Minister Narendra Modi called upon the collective spirit of 130 crore of "Team India", to take the country forward and ensure that it is a developed nation in the next 25 years.