Get latest articles and stories on India at LatestLY. Expressing confidence that the BJP would register a victory in the forthcoming civic body election in Bengaluru, Chief Minister Basavaraj Bommai has said, "the victory of BJP in BBMP election is as true as the sun rising in the east." 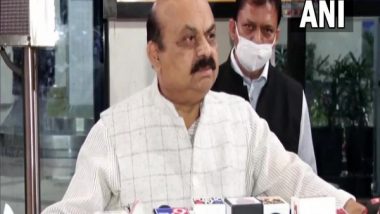 Bengaluru (Karnataka), January 29 (ANI): Expressing confidence that the BJP would register a victory in the forthcoming civic body election in Bengaluru, Chief Minister Basavaraj Bommai has said, "the victory of BJP in BBMP election is as true as the sun rising in the east."

Speaking at a special programme organised at the State BJP office, he said, "There is no doubt that people of Bengaluru will support the BJP. We should convey the work done by the government to the people. Ours is the government that walks the talk."

He appealed to the party workers to take up the campaign with confidence.

"The state government has proved its responsiveness in every sector. Doubling the compensation for crop loss during the floods, increasing the pension under Sandhya Suraksha Yojana, pension for the physically challenged and widows has benefited 58 lakh persons," he said as he listed out the work done by his government.

Also Read | India Never Been Linked to a Group of People or Any Religion, Says Report.

"Families of those who lost their lives due to COVID have been paid an ex-gratia of Rs1.50 lakh, Construction of 5 lakh houses by state government and sanction of 6.50 lakh houses by the union government, Bommai listed out as he explained the achievements," he added.

Terming his government as all-pervasive and all-inclusive, he said, "Apart from Rs 6000cr provided for the development of Bengaluru, Rs1500cr for remodelling of main stormwater drains, Rs2300cr for development of 12 corridors, development of 75 slums and 75 parks under the Amrith programme have been taken up, Bommai said.

He stated that a strong foundation has been laid for development in the last 6 months of his administration.

Determined to make Bengaluru an international city, he said that his government has the strength and the confidence to face tough challenges.

Our government has resolved to complete the all-round development of Bengaluru and make it an international level city, he said and thanked Prime Minister Modi, Union Home Minister Amit Shah, BJP National President JP Nadda, state president Nalin Kumar Kateel, 3 MPs of Bengaluru, all MLAs and ministers of Bengaluru for their cooperation.

He also recalled the contribution of veteran leader BS Yediyurappa, other leaders of the party and the committed workers for the growth of BJP in Bengaluru. (ANI)