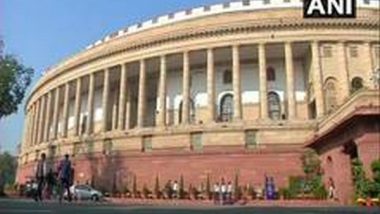 President Ram Nath Kovind will address a joint sitting of both Houses of Parliament on January 31 at the start of the budget session. The Union budget will be presented on February 1. Also Read | Uttar Pradesh Assembly Elections 2022: 'BJP Necessary for Development of the State', Says CM Yogi Adityanath.

Sources said Prime Minister Narendra Modi is expected to reply to the debate on the motion of thanks to the President's Address on February 7 in Lok Sabha and the next day in the Rajya Sabha. Also Read | Ahmedabad Shocker: Science Teacher Rapes Student Over Four Years; Arrested.

The President's speech highlights the government's policies, priorities and plans. It highlights what the government has done over the last year and gives a framework for its agenda ahead. The Prime Minister's reply marks the conclusion of debate on the motion of thanks in the two Houses.

The upper House of Parliament is likely to take up the private members bill on February 4. The first half of the budget session will be held from January 31 to February 11 and the second part from March 14 to April 8.