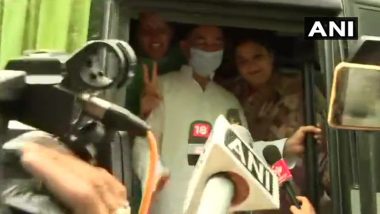 Jaipur/New Delhi, July 13: Congress MLAs on Monday hold themselves up in a resort near Jaipur after a legislature party meeting, where they expressed support for Rajasthan Chief Minister Ashok Gehlot and only indirectly referred to Sachin Pilot, whose rebellion threatens his government.

A resolution adopted at the Congress Legislature Party (CLP) meeting urged “strong disciplinary action” against any party office-bearer or CLP member who does anything to weaken the government or the party. Rajasthan Congress Crisis: Sachin Pilot Denies Meeting Rahul Gandhi in Delhi, Chorus for 'Disciplinary Action' Grows.

But the resolution stopped short of naming Pilot, who is deputy chief minister and also heads the state unit of the party. Before the meeting, senior Congress leader Randeep Surjewala adopted a conciliatory tone, saying Pilot and other MLAs could still attend the CLP meeting from which they had distanced themselves.

Sources said Congress president Sonia Gandhi and former party chief Rahul Gandhi were in touch with Pilot, upset since he was denied the Rajasthan chief minister's post after the December 2018 assembly elections.

There was no official word on the number of MLAs who attended the Congress Legislature Party meeting at Gehlot's home, but party leaders claimed 106 legislators were there.

If correct, this staves off the immediate challenge posed by Pilot, who claimed on Sunday night that he has the support of over 30 Congress MLAs and the Gehlot government is in minority. The Congress has 107 members in the state assembly and also claims the support of some independents.

But with the Congress MLAs being packed into buses headed for Fairmont Hotel on the outskirts of the city, it is clear that the crisis is not over. The CLP resolution blamed the BJP for the crisis. On Saturday, Gehlot had accused the opposition party of trying to lure away Congress MLAs.

It demanded strong disciplinary action against any Congress office bearer or CLP member who “directly or indirectly” acted against the party. Addressing a press conference before the meeting, AICC spokesperson Randeep Surjewala indicated that Pilot and his supporters were still welcome to attend it. “Doors are open for Sachin Pilot and other MLAs,” he said.

He said the party's top leadership spoke to Pilot several times in the last 72 hours. Surjewala said differences in a family can be resolved within the family, suggesting that Pilot and other MLAs should come and discuss grievances at party forums.

“When a member of the family gets annoyed, he does not make the family fall but sits with family members and resolves the issue,” he said. “Doors are open for Sachin Pilot and other MLAs. They will be heard and solutions will be found. This is the discipline of the party,” the AICC spokesperson said. Sachin Pilot's Posters Back at Congress Headquarters After Party Says 'Doors Open For All' Amid Rajasthan Political Crisis.

The Congress had rushed Pande, Surjewala and Ajay Maken to Jaipur as observers at the meeting, amid a power tussle between its two Rajasthan leaders. The party had issued a whip ahead of the CLP meeting, indicating disciplinary action against any MLA who failed to turn up.

In a statement, Pilot, however, had made clear that he would not attend the meeting. He also claimed that he had the support of over 30 Congress MLAs and some independents. The Congress Legislature Party meeting began about three hours later than scheduled, with ministers and MLAs flashed victory signs for the cameras.