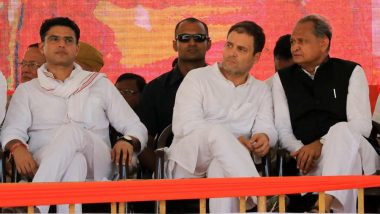 Jaipur, July 13: Even as Congress rebel Sachin Pilot reiterated his decision of "not joining BJP", he sent out a stern message by refusing to ex-party chief Rahul Gandhi. Sources close to  Pilot, while speaking to reporters, claimed that Pilot denied the proposals sent by the Congress high command to arrange his meeting with the Gandhi scion.

With Pilot refusing to meet Gandhi - with whom he once shared deep bonhomie within the party - analysts claim the crisis within the Rajasthan unit is unlikely to be settled down soon. This could also be an indication that Pilot is continuing backchannel talks with the BJP despite denying being in touch with the saffron camp. Rajasthan Political Crisis: Congress MLAs Sent in Buses to Resort Outside Jaipur After Meeting With CM Ashok Gehlot.

Amid Pilot's defiant approach, the chorus for "disciplinary action" against him has grown. The resolution passed by the Congress Legislative Party (CLP) in Rajasthan - which had convened for a key meeting at the resident of Gehlot earlier today - reiterated the sentiment.

The resolution sought strict action against elements within the party who are conspiring with the opposition BJP to bring down the state government.

"This meet urges that strict disciplinary action be taken against any office bearer or member of Legislative Party who indulges in activities against the Congress government, party or gets involved in any conspiracy," the resolution stated.

"This ripping off of democracy by BJP is insult to 8 Cr people of Rajasthan, they'll not accept it. CLP meet expresses its confidence in Congress Pres Sonia Gandhi and leader Rahul Gandhi and unanimously supports the govt led by Ashok Gehlot," it further added.

According to the Gehlot camp, a total of 107 MLAs attended the meeting called by the Chief Minister. Sources close to Pilot accused the Congress of "lying", saying that only 93-94 legislators attended the CLP meet. Following the meeting, the MLAs along with Gehlot were taken to the Fairmont Hotel on outskirts of Jaipur.

(The above story first appeared on LatestLY on Jul 13, 2020 04:41 PM IST. For more news and updates on politics, world, sports, entertainment and lifestyle, log on to our website latestly.com).