CBSE Officials Rule out Conducting Board Exams Online, to Be in Written Mode Only Amid COVID-19 Pandemic

However, due to the COVID-19 situation, the April exam was postponed twice and conducted in September. 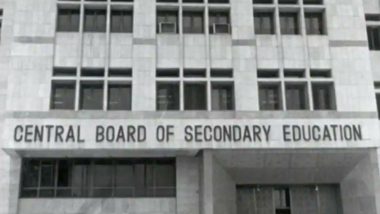 New Delhi, December 2: Board exams in 2021 will be in written mode only and not online, Central Board of Secondary Education (CBSE) officials said on Wednesday even as consultations on dates for conduct of the examination are still underway.

The officials of the board also said that if students were not able to sit for practicals in classes before the exams, alternatives would be explored. Also Read | Chhattisgarh CM Bhupesh Baghel Asks PM Narendra Modi for Free of Cost COVID-19 Vaccine on Priority Basis for the State.

"No final decision has been taken regarding the dates for conduct of board exams, and consultations with stakeholders are still in process. The exams, as and when they are conducted, will be in written mode and not in an online mode. The exams will be conducted following all COVID protocols," a senior CBSE official said. Also Read | CCTVs Cameras Should be Installed at All Police Stations, Central Investigative Agencies, Supreme Court Directs States And Union Territories.

"In case students are not able to do practicals in classes before the exams, alternatives to practical exams will have to be explored," the official added.

Union Minister of Education Ramesh Pokhriyal 'Nishank' is supposed to hold an interaction with students, teachers and parents on December 10 on the issue of conduct of board examinations and competitive examinations next year.

Schools across the country were closed in March to contain the spread of COVID-19 and partially reopened in some states from October 15. However, a few states decided to keep them closed in view of a spike in the infections.

The board exams that were being conducted in March had to be postponed mid-way. The exams were later cancelled, and the results were announced on the basis of an alternative assessment scheme. Competitive exams like JEE and NEET were also postponed twice this year due to the COVID-19 pandemic.

There have been demands for postponement of board exams to May in view of the continued closure of schools and teaching-learning activities being completely online. The Joint Entrance Exam (JEE)-Main for admission to engineering colleges across the country is likely to be held in February instead of January, according to officials.

The rising number of COVID-19 cases and engineering admission for this year still being underway are among the reasons behind authorities contemplating the move.

The JEE-Main, which is the national-level competitive test for admission to various undergraduate engineering and architecture courses, is conducted twice a year – January and April. However, due to the COVID-19 situation, the April exam was postponed twice and conducted in September.