The Jain Community under Sri Jain Shwetamber Terapanthi Sabha on Thursday launched a COVID-19 vaccination drive for the city's Jain Community in which a subsidy of Rs 500 is being given on prices fixed by the state government on vaccine doses. 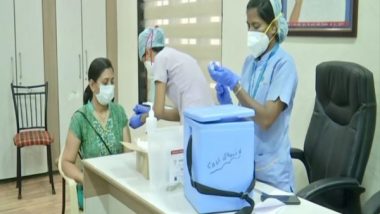 Visuals from vaccination drive in Hyderabad

Hyderabad (Telangana) [India], June 11 (ANI): The Jain Community under Sri Jain Shwetamber Terapanthi Sabha on Thursday launched a COVID-19 vaccination drive for the city's Jain Community in which a subsidy of Rs 500 is being given on prices fixed by the state government on vaccine doses.

This vaccination drive, which will continue till June 15, was inaugurated on Thursday by Hyderabad City Police Commissioner Anjani Kumar.

The organisers of the drive have sought the help of Apollo Hospitals for procurement of vaccines and administering the jabs to people.

"Under this vaccination drive, we are offering vaccination service to all the people from Jain Community."

Stating that on the very first day, they received registrations of around 2,000 people, Jain said they aim to vaccinate even more people. "We aim to deliver vaccine shots to around 4,000 to 5,000 people."

He further stated that the Terapanthi Sabha is giving a concession of Rs 500 on every vaccine dose over the price fixed by the Government. He said that the drive will continue till June 15 and if at all there are further more registrations coming in, then they will continue the drive.

Anjani Kumar, Hyderabad City Police Commissioner said, "Holding such vaccination drive will help people get vaccinated in large numbers. I urge people to come forward and help the poor and needy section of the society and provide similar facilities to them too."

Dileep Daga, Vice President of Sri Jain Shwetamber Terapanthi Sabha said," The best thing about the vaccination drive s that we are giving a rebate of Rs 500 on each dose. We urge people of our community to come in large numbers and get vaccinated. This drive is costing us around Rs 10 lakh which is borne by our organisation. We also received donations for this drive as well. We will use those funds to extend the drive and take it to other places as well."

"This is a very good step taken towards the society. I would like to thank Shwetamber Terapanthi Sabha for organising this drive," said Aishwarya, a beneficiary who had come to participate in the drive to get vaccinated. (ANI)