Negotiation over the pricing of COVID-19 vaccine ZyCov-D between the central government and Zydus Cadila are still underway. The final decision is expected by this week, as per the government sources. 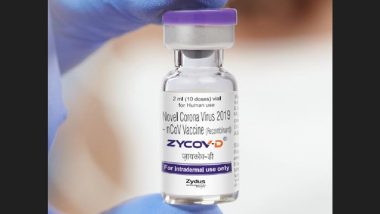 New Delhi, October 4: Negotiation over the pricing of COVID-19 vaccine ZyCov-D between the central government and Zydus Cadila are still underway. The final decision is expected by this week, as per the government sources.

The government is negotiating for a reduction in the price of the vaccine. The decision of the pricing is taking time owing to two factors; one is that it is a three-dose vaccine and the other is its application. A needle-free applicator or a jet injector is used for the application of the ZyCov-D vaccine, which can be used to vaccinate 10,000 people.

Underlining the dilemma of the government, the sources said, "The final cost of ZyCov-D has not been finalised yet because the cost of the special applicator that will be used for the vaccine is around Rs 90 and the jet injector costs Rs 30,000."

According to government sources, both the central government and Zydus will finalise a price soon.

Earlier in the Covid briefing, Niti Aayog member (health) Dr VK Paul admitted that the price of the vaccine is a clear issue.

The ZyCoV-D vaccine is a needle-free vaccine and would be administered intradermally which is to be done by using PharmaJet, a needle-free applicator that ensures painless vaccination.

This will help in administering the vaccine to kids. As per Zydus Cadila, the company also plans to seek approval for the two-dose regimen of the vaccine.

The trials for the same are underway, considering the burden on healthcare and the expense of buying three doses.

Each dose is a 2mg x 3 dose, which makes it a vaccine of six mg in totality. The ZyCoV-D vaccine is a plasmid DNA vaccine. It uses non-replicating DNA molecules. As per Zydus Cadila, the vaccine which when administered produces the spike protein of the SARS-CoV-2 virus and elicits an immune response mediated by the cellular and humoral arm of the human immune system, which plays a vital role in protection from disease as well as viral clearance.