The intensity of Cyclone Gulab weakened into a well-marked low-pressure area over western parts of Vidarbha and neighbourhood, the India Meteorological Department (IMD) informed on Tuesday. 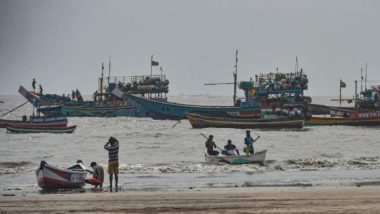 National Disaster Response Force on Monday informed that a team of NDRF has been deployed in Osmanabad ahead of Cyclone Gulab. India Meteorological Department also informed, "Depression lay centred over Telangana and adjoining areas of Marathwada and Vidarbha to weaken into a well-marked low-pressure area during next six hours." Maharashtra Rains: 10 Dead, Over 200 Cattle Washed Away After Heavy Rainfall Triggers Floods in Marathwada Region.

Earlier, on Monday, the IMD informed that the Cyclonic storm 'Gulab' has weakened into a depression. A red alert was sounded in Odisha and Andhra Pradesh for a cyclonic warning, and fishermen were alerted to stay away from the sea by the IMD on Sunday.