The senior Divisional Commercial Manager of Waltair Division of East Coast Railway, A.K. Tripathi said that around 65 ongoing trains were cancelled from the Visakhapatnam district of Andhra Pradesh for December 3 and 4 in view of Cyclone Jawad. 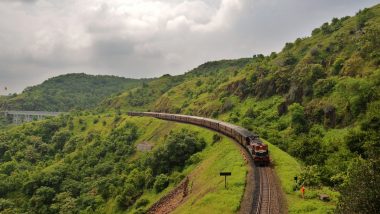 Visakhapatnam, December 3: In view of the cyclone Jawad, around 65 trains from the Visakhapatnam district of Andhra Pradesh scheduled for December 3 and 4 have been cancelled, informed the East Coast Railways on Friday.

The senior Divisional Commercial Manager of Waltair Division of East Coast Railway, A.K. Tripathi said that around 65 ongoing trains were cancelled from the Visakhapatnam district of Andhra Pradesh for December 3 and 4 in view of Cyclone Jawad.

"A total of 46 NDRF teams have been sent to Odisha, West Bengal and Andhra Pradesh. They are prepositioned there. IDS is on alert if the situation arises to airlift any of the teams. 18 more teams are on standby," said Atul Karwal, Director General, NDRF.

The deep depression over the west-central adjoining southeast Bay of Bengal will intensify into a cyclonic storm during the next 12 hours and will reach north Andhra Pradesh-Odisha coast by Saturday morning, informed the India Meteorological Department (IMD) on Friday.

As the low-pressure area over the southeast Bay of Bengal continues to develop in view of cyclone Jawad, the Odisha government on Thursday evening issued guidelines to prevent its adverse effects. Earlier, IMD informed that the low-pressure region in the Bay of Bengal is expected to intensify into Cyclone Jawad and is expected to reach the coast of north Andhra Pradesh - Odisha around the morning of Saturday, December 4, 2021, with the wind speed ranging up to 100 kmph. Cyclone Jawad Likely To Reach Vishakhapatnam by Evening on December 4, Says IMD.

It is likely to cause heavy rainfall in the coastal districts of Andhra Pradesh, Odisha and West Bengal. IMD has been issuing regular bulletins with the latest forecast to all the concerned states. Prime Minister Narendra Modi also chaired a high-level meeting on Thursday to review the preparedness of States and Central Ministries and concerned agencies to deal with the situation arising out of the likely formation of cyclone Jawad, informed the Prime Minister's Office.

Cabinet Secretary has also reviewed the situation and preparedness with the Chief Secretaries of all the Coastal States and Central Ministries or Agencies concerned.