The overall air quality index (AQI) was 280, according to the System of Air Quality and Weather Forecasting And Research (SAFAR) on Friday. 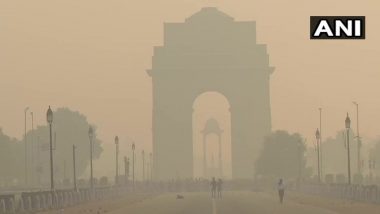 New Delhi, March 12: Delhites woke up witnessing a cloudy morning and the air quality plunged into the poor category. The overall air quality index (AQI) was 280, according to the System of Air Quality and Weather Forecasting And Research (SAFAR) on Friday.

Some areas in the national capital including Pusa Road, Lodhi Road, IIT Delhi and Ayanagar recorded air quality in the poor category with an AQI of 249, 235, 249 and 239 respectively. Delhi Air Quality: Why Does Air Pollution Rises And Air Quality Start Dipping in National Capital During Winters?

The AQI yesterday, however, was in the 'moderate' category with an AQI of 163. SAFAR in its daily report stated: "The overall Delhi air quality is in the 'poor' category. Surface winds are calm. Thunderstorms with gusty winds and local dust lifting are likely at isolated places today and tomorrow. An increase in wind speed and ventilation is expected on March 12. AQI is likely to stay in the poor to 'moderate' category for the next two days. Moderate AQI is forecasted for March 14."