Every year, air pollution rises and air quality dips in Delhi ahead of the winter season. 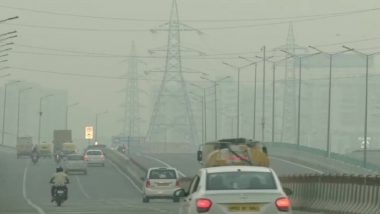 New Delhi, October 19: A layer of haze lingers over Delhi as the air quality has deteriorated in the national capital on Monday. The air quality remains "very poor", "poor" or "moderate" at most places in Delhi. Every year, air pollution rises and air quality dips in Delhi ahead of the winter season. Various domestic and sometime global factors are behind this change. In 2017, a storm that originated in Iraq, Saudi Arabia and Kuwait caused a drastic dip in Delhi’s air quality. Delhi Air Pollution: Power Minister Satyendar Jain Writes to Centre to Shut Down All 11 Thermal Power Plants of NCR.

Why Does Delhi's Air Quality Deteriorate in Winters?

One of the reasons behind a drastic dip in Delhi's air quality is the dip in temperatures. When temperatures go down in winter, the inversion height - which is the layer beyond which pollutants cannot disperse into the upper layer of the atmosphere - is lowered. The concentration of pollutants in the air increases when this happens. Besides, high-speed winds disperse pollutants in the air. However, during the winter season, Delhi sees a dip in wind speed.

Stubble burning is another factor that contributes to the rising of air pollution in Delhi. To get rid of paddy stubble as they plan to clear fields and sow wheat for the next cycle, farmers in neighbouring states of Punjab and Haryana resort to farm fires. Farmers set paddy straw and stalks on fire as it is the easiest way to get rid of it and that too at a low cost. The stubble burning season is around 45 days long. Delhi Air Pollution: Stubble Burning in Punjab, Haryana and Other Neighbouring Regions to Be Lesser This Year, Says CPCB.

Alwaz, a morning walker says, "We are noticing the change in the air, as it's getting harder to breathe while cycling & running. We might have to stop morning walks in the coming days." pic.twitter.com/m029KeGDER

According to the System of Air Quality and Weather Forecasting And Research (SAFAR), the share of stubble burning in Delhi's pollution reached 46 percent last year. Dust pollution and vehicular pollution are the two biggest causes of dipping air quality in Delhi in winters. According to a study conducted by IIT-Kanpur, dust pollution contributes to 56% of PM 10 and the PM2.5 load at 59 t/d, the top contributors being road 38% of PM 2.5 concentration.

Vehicular pollution caused 20% of PM 2.5 in winters in Delhi, said the IIT Kanpur study. Even though several initiatives have been launched to control rising air pollution in Delhi, air quality is likely to remain poor in the national capital as vehicles are back on the road after coronavirus-induced lockdown, the temperature is dipping and stubble burning has started.

(The above story first appeared on LatestLY on Oct 19, 2020 09:34 AM IST. For more news and updates on politics, world, sports, entertainment and lifestyle, log on to our website latestly.com).