The Government of Dominica has told a court there to reject the habeas corpus petition filed on behalf of businessman Mehul Choksi who had claimed that he was abducted and forcefully brought to the Caribbean island nation, local media reported. 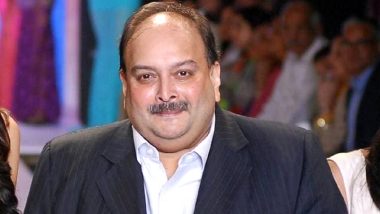 New Delhi, June 2: The Government of Dominica has told a court there to reject the habeas corpus petition filed on behalf of businessman Mehul Choksi who had claimed that he was abducted and forcefully brought to the Caribbean island nation, local media reported. The High Court of Dominica ordered that the businessman be produced in a magistrate court to answer charges of his illegal entry into the country and adjourned the hearing on the habeas corpus petition till Thursday, according to local media. PNB Scam: Dominica Opposition Slams PM Roosevelt Skerrit Over Mehul Choksi Episode, Demands Full Investigation.

Rejecting the submission of Choksi who is wanted in India in an alleged Rs 13,500 crore loan fraud case in Punjab National Bank, the prosecution said the habeas corpus petition does not stand as he had illegally entered the country and was subsequently detained. "The matter being heard is of habeas corpus petition...and not of his repatriation to India. His citizenship is not in question before the court," Choksi's lawyer Vijay Aggarwal said. 'Mehul Choksi Might Have Taken His Girlfriend on Romantic Trip to Dominica And Got Caught', Says Antiguan PM Gaston Browne.

High Court of Dominica Judge Bernie Stephenson heard the matter through video-conferencing with the diamond trader attending the hearing from the hospital where he was admitted recently. The judge asked authorities to share court documents with Choksi who is admitted at the Dominica-China Friendship Hospital. His lawyers said that he does not feel safe in police custody and that he should be sent back to Antigua and Barbuda, local media reported. Mehul Choksi Moved to Government Quarantine Facility in Dominica: Sources.

He also said he would pay for his security. His lawyers also raised the issue of injury marks found on his body and him being hospitalised. In case of an adverse order, Choksi has the option of appealing in a higher court. The diamantaire, who mysteriously went missing on May 23 from Antigua and Barbuda where he had been staying since 2018 as a citizen, was detained in neighbouring Dominica for illegal entry after a possible romantic escapade with his rumoured girlfriend. His lawyers alleged that he was kidnapped from Jolly Harbour in Antigua by policemen looking like Antiguan and Indian, and brought to Dominica on a boat.

Last week, the Government of Dominica had issued a press statement that it was verifying status of Choksi's citizenship with Antigua and Barbuda. "Once the information is provided by the Antigua authorities, possible arrangements will be made for Mr. Mehul Choksi to be repatriated to Antigua," the statement had said. A team of multi-agency officials led by a CBI DIG has gone to Dominica to bring Choksi to India if court there clears his deportation to India, officials said.

Choksi's arrest has created turbulence in the calm political waters of the neighbouring Caribbean island countries -- Antigua and Barbuda and Dominica --where allegations have been levelled against opposition parties of supporting the businessman having an Interpol Red Notice against him. Dominican Leader of Opposition Lennox Linton had to issue a denial on the reports of meeting Chetan Choksi, the brother of Mehul Choksi, or receiving any money from him.

"I do not know Chetan Choksi. I have never seen him. I have never spoken to him. I have never met with him," Dominica News Online quoted a video message released by Linton. Local media outlet Associate Times had alleged that Choksi arrived on a private jet on May 29 and met Linton at his home in Marigot locality next day for nearly two hours where he gave token money of USD 2 lakh and promised funding for elections in return for raising the issue in Parliament.

The outlet alleged that Linton was quiet on the Mehul Choksi affair till meeting his brother Chetan. After the meeting, he started attacks on the government over the arrest of the fugitive diamantaire. Choksi and his nephew Nirav Modi are wanted for allegedly siphoning Rs 13,500 crore of public money from the state-run Punjab National Bank (PNB) using letters of undertaking.

While Modi is in a London prison after being repeatedly denied bail and is contesting his extradition to India, Choksi took citizenship of Antigua and Barbuda in 2017 using the Citizenship by Investment programme before fleeing India in the first week of January 2018. The scam came to light subsequently.