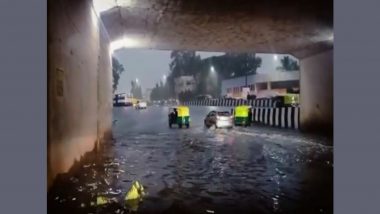 Bengaluru, May 1: Even as northwest and central India sizzled under the unrelenting heat, several parts of Karnataka's Bengaluru received heavy rainfall leading to waterlogging in parts of the city. Okalipuram underpass in the Silicon Valley of India experienced waterlogging after heavy rainfall and it led to traffic interruption for almost three hours.

Heavy rainfall hit several parts of Bengaluru including Frazer Town, Shivajinagar, Chandra Layout, Vijayanagar, and Hosahalli. The thunder and lightning caused power interruption in many parts of the city. A total of 32 electric poles had fallen in the Chandapura division, 12 poles were damaged in KR Puram, one transformer failed in the Kengeri division and two electric poles fell in B.T.M Layout.

Western disturbances are also approaching northwest India and are likely to bring thunderstorms or dust storms to the region. As a result, Shimla also received light rainfall on Sunday evening.

The national weather forecasting agency on Sunday said that the heatwave conditions in isolated parts over Himachal Pradesh, Punjab, Haryana-Chandigarh-Delhi, south Uttar Pradesh, Kutch and East Rajasthan are very likely to abate after May 1.

The weather office has predicted a fall in maximum temperatures by 3-4 Degree Celsius over many parts of northwest India during the next two days.