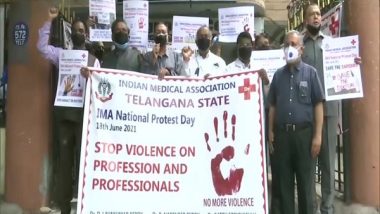 The slogan of the protest is - 'Save the Saviour' and doctors and healthcare workers could be seen across the country with placards stating 'Stop violence against profession and professionals'.

At the IMA office in Hyderabad, the staff and doctors protested wearing black badges.

State Secretary of IMA Telangana, Dr Narendra Reddy told ANI that violence against doctors should be made a non-bailable offence.

"We had an act in 2008, where violence against the healthcare workers attracts 3 years of jail sentence which is bailable. If the people will attack doctors, they will get scared and will not take up the serious cases," Dr Reddy said.

"Doctors should be protected. We are the saviours, we save people. We will get scared and run away from our responsibilities. The society will suffer," he added.

The doctors at All India Medical Sciences (AIIMS) in Delhi also took part in the protest.

General Secretary of IMA, Dr Jayesh Lele said, "IMA is observing June 18 as National Protest Day. We want a central act over violence against the doctors. We have lost at least 1400 doctors while protecting people from the pandemic."

"The government brought a draft Act regarding violence against the doctors in 2019. We want that to be an Act," Dr Lele said.

The IMA unit in Ludhiana also took part in the protest.

President of IMA Ludhiana, Dr Saroj Aggarwal said, "There should be zero tolerance to violence against doctors and hospitals. People should learn to trust doctors and should know how to differentiate between qualified and unqualified people."

"Doctors all over the country are observing June 18 as the National Protest Day by wearing black badges, masks and ribbons to mark the day as the government has failed to protect the right to safety of the doctor fraternity," Secretary IMA Ludhiana, Dr Ashish Ohri said.

There have been incidents of violence in which doctors serving in COVID wards were beaten and brutally assaulted in Bihar, West Bengal, Assam, Uttar Pradesh and Karnataka.

The IMA on Wednesday informed that as many as 730 doctors died during the second wave of the COVID pandemic.