Get latest articles and stories on India at LatestLY. The Brihanmumbai Municipal Corporation (BMC) has prohibited the immersion of the idols made of Plaster of Paris in the natural water resources including the sea during the Ganeshotsav. 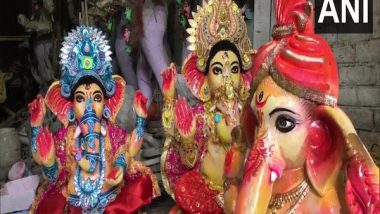 Mumbai (Maharashtra) [India], July 5 (ANI): The Brihanmumbai Municipal Corporation (BMC) has prohibited the immersion of the idols made of Plaster of Paris in the natural water resources including the sea during the Ganeshotsav.

The immersion of the Plaster of Paris idols in artificial ponds has been made mandatory.

BMC has also instructed that such statues should be clearly marked as 'POP statues'.

The decisions were taken in a coordination meeting held at BMC's F South office organized under Deputy Commissioner Zone-2, Harshad Kale on Monday.

"It was also decided in the meeting that the height of Ganesh idols to be installed in the houses should not exceed 2 feet," said the BMC.

Notably, every year the BMC makes arrangements for artificial ponds for the immersion of Ganpati idols. In all 24 wards of BMC, over 300 artificial ponds are established with manpower so that people can perform the rituals of immersion during Ganeshotsav. This is an eco-friendly initiative by the civic body to protect natural water resources from the huge number of idols being immersed in them.

Also, it becomes easier to dispose of the immersed idols from an artificial pond than disposing them from the banks of a natural pond or sea beaches.

This decision of BMC, taken in the context of Plaster of Paris idols, will affect many Ganeshotsav Mandals as they use mostly use POP statues. (ANI)