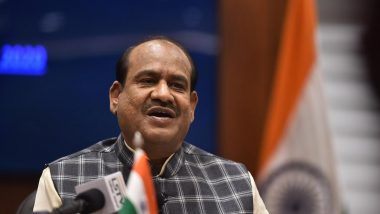 New Delhi, December 22: Lok Sabha reported 82 per cent of productivity in the winter session of Parliament, Speaker Om Birla said here on Wednesday. "The House held 18 sittings during the session, in which various subjects were discussed for a total of 83 hours and 12 minutes. Members actively participated in the proceedings of the House even till late night," Birla said at a press conference.

"During the session, on December 2, the proceedings of the House lasted till 12.20 am and the productivity of that day was recorded to be 204 per cent, which is the highest productivity recorded in a single day in recent years," he added. Winter Session of Rajya Sabha Adjourned Sine Die Ahead Of Schedule.

The lower house of the parliament held a discussion on COVID-19 which lasted more than 12 hours. A total of 99 MPs participated in the 12 hours 26 minutes long discussion on the COVID-19, "in which they shared with the House the best work done in their respective areas during the COVID period," he said. Sonia Gandhi Demands Detailed Discussion in Parliament on Border Issues at Congress Meet.

During the session, out of 360 starred questions, 91 questions were answered orally while 4,140 unstarred questions were laid on the table of the House. The winter session of parliament began on November 29. Both Lok Sabha and Rajya Sabha were adjourned sine die, two days ahead of schedule on Wednesday.